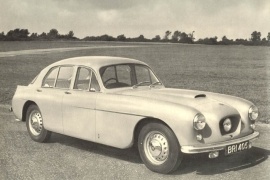 A long time before the four-door coupe vehicles were a fashion, a British car-maker introduced a sloped back, four-door sedan.
It was the Bristol 405 drop-head.

After the successful Bristol 404 coupe, the British car-maker decided to offer a four-door version for that vehicle. Since the car was a body-on-frame construction, it was easier to build a longer bodywork based on an extended chassis.

The car was styled by former aircraft engineers. It was sloped and aerodynamic. The front end featured two round headlights incorporated in the front fenders and a third headlamp installed in the grille. Up to the B-pillars, it looked similar to the 404 coupe, but afterward, a pair of doors were added. The 405 was available in two forms - the more common four-door sedan and a much rarer 405 drophead coupe. The latter had a body built by Abbotts of Farnham in 42 units.

The interior featured an instrument panel with seven dials and a two-spoke steering wheel. Apart from a few details, all the cabin was garnished with leather and wood. With its wide front seats, it offered comfort for their occupants, but the rear bench didn’t offer too much legroom or headroom.

For the four-door drophead coupe, the car was fitted with a special, 2.0-liter engine that offered 125 hp, which was a lot in 1955. The standard version offered only 105 hp. It was mated to a 4-speed manual. 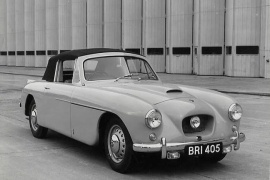 The British car company Bristol started to build more cars for passion rather than for family usage and the 405 Drophead Coupe was a good example.
It was produced in a very small number.

Bristol started to move away from its connection with the German car-maker BMW. They built cars together before WWII and up until the 404 model its products even had the “kidney grille” in the front. The 405 continued the evolution of the brand identity of its own. To spice things up, the convertible version was introduced, in the form of the Drophead Coupe.

The front of the car featured the new “bomber” nose, inspired by the Beaufighter airplane built by Bristol during WWII. On the radiator’s grille, the manufacturer installed the third headlight to improve the night driving experience. The bodywork was made by E D Abbott Limited from Farnham, U.K. According to some historians, only 42 vehicles were made.

Due to a long wheelbase, the Bristol 405 Drophead Coupe offered four seats inside. It was not intended to be a sports car, but more of a convertible gran-tourer. The instrument panel was inspired by WWII planes, with more gauges installed in front of the driver. The steering wheel featured a special design, with two curved spokes.

The engine was an evolution over the BMW 2.0-liter inline-six unit found in the 327/328 before WWII. It had a higher compression ratio and was fed by three Solex carburetors. In that setup, the car produced 125 hp, which was very high for that era. To stop the car, the 405 was offered with an option for front disc brakes and most of the buyers did that or upgraded it later