Built in Malaysia by a local company, the Bufori brand launched the third model with a touch of expensive materials, including a 24k gold badge on the hood.
Even if it sounds like a fairy tale, it isn’t. Gerry, George, and Anthony Khouri were three brothers. Gerri decided to build three cars for himself and his brothers. He was inspired by some ’30s American roadsters and built the first model, named Madison, in 1986. Surprisingly, he was asked if he couldn’t make more for other eccentric locals. Soon, from a small shop, the Bufori brand grew and had over 100 employees. In 2004, the carmaker built the La Joya model.

The car was designed as a small coupe inspired by former American cars produced between WWI and WWII. It sported large fenders that covered the wheels and a narrower engine compartment with side-opened panels and louvers. Its bumper was made from tubular elements mounted at the front, directly on the chassis endings. A pinned-out mesh-grille mimicked the same old vehicles from the La Belle Epoque era. Unlike its predecessors, the La Joya was a coupe with a rounded roof and a sloped rear end. The trunk featured a very wide lid. Worth mentioning that the carmaker built the bodywork from carbon fiber and kevlar materials.

Inside, the leather and wood veneers were manually crafted, and that led to high-quality products. Its cabin offered room just for two occupants, separated by a tall center console and a folding armrest.

Bufori installed a 2.7-liter Audi engine under the hood, paired with a standard six-speed manual or a four-speed automatic gearbox with sequential manual override. 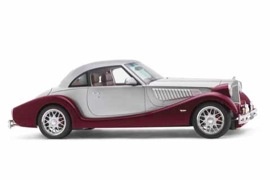