When the Chiron was launched, a lot of people asked if the Bugatti will build something even faster.
With the 2018 Divo, it did, but in a different way

Most of the vehicles produced by Bugatti after the Veyron were faster than the model it replaced. By faster, meaning higher top speed. But that wasn’t the goal for the Divo. But still, it was faster.

For the outside design, the car kept the main cues of the brand: a horse-shoe on the front with a large grille, a C-shaped side air-scoops and a long cabin that melted, visually the cockpit with the engine bay. The front had few air-intakes more and a new air-outlet on the hood was used to help to cool the front radiator.

For the performance point of view, the goal was to make the Divo faster than the Chiron on a race-track. And it proved that it can. Even though both had the same engine and transmission, the Divo was able to turn faster. Thanks to its improved aerodynamic and to the huge rear-wing, it had a negative aerodynamic, which means that the faster it goes, the more force is put on the road. But on a static measurement, the Divo was 35 kg (77 lbs) lighter than the Chiron.

Both the Chiron and the Divo also had the same tires and those were rated to a certain speed with a certain weight. Since the aerodynamic pressure was 90 kg (198 lbs) bigger on the Divo than on its older brother, the manufacturer didn’t want to risk and limited the car to a maximum 380 kph (236 mph). 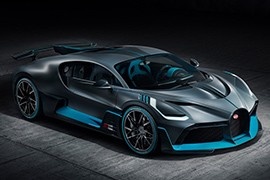