Also known as de Dietrich Bugatti, the Type 5 was another baby step taken by the French car manufacturer at the beginning of the XXth century.
The battle between electric vehicles and internal combustion cars was not over, but Bugatti placed his bets on the later ones. He eventually won, but he had to go through years of painstaking efforts to get there. Before WWI, he began upgrading and working on his cars and developed the Type 5 as a link between the Type 4 and the following 6 and 7 models.

Bugatti used a tubular chassis for the Type 5 and installed a huge engine compartment in front of the occupant’s area. It was built as a race-car with no other body panels other than those covering the engine. At the front, the big and exposed radiator sported the red, oval badge of the manufacturer. One important detail was the crank that was not removable and was kept on one side by a chain. The driver had to use it to start the engine.

Like any other race car from that era, the Type 5 featured a taller seat for the driver and a shorter one for the co-driver/mechanic. There were no seatbelts or specific racing features. While the driver had to keep an eye on the small speedometer mounted almost on the floor, the co-driver had to keep an eye on the lubrication system. Just behind them, Bugatti installed a wood crate for spare parts, tools, and warm clothes.

Emille Mathis designed the 12.9-liter four-cylinder “Hermes” engine. It provided 45 hp and was paired to a four-speed manual gearbox. Power went to the rear axle via a chain. 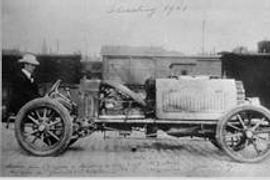