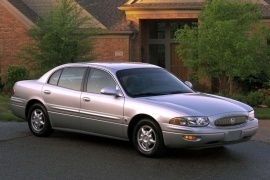 Even though it was called “poor man’s Cadillac”, the Buick LeSabre confirmed its premium level of comfort and smooth ride despite lacking some features from a luxury brand.
The LeSabre nameplate was introduced on a concept-car in 1951 and featured aircraft-inspired elements four years after the F-86 Sabre fighter jet was launched and scored major air-combat victories in the Korean war. But the first series-production LeSabre appeared in 1959 and it was a luxury vehicle. The eighth-generation was the best selling full-size car in the U.S. market until it was discontinued in 2005.

The 1999 LeSabre was based on the same platform as the Cadillac Seville. Its rounded shape with swept-back over front fenders headlights was specific to the brand. The oval-shaped grille and the curves on the beltline enlisted the car into the biodesign trend, which was about to end.

Inside, a front bench with a center armrest was available as an alternative for a two-seat configuration. The leather upholstery was on the options list, but cloth seats were fitted as standard. A flat and vertical dash-panel was in front of the driver, with a clear instrument cluster illuminated in green colors. Due to its big wheelbase, LeSabre offered good comfort for two passengers in the rear. Interestingly though, there were two three-point seatbelts in the back and a lap belt for the middle passenger.

The LeSabre was powered by a 3.8-liter V6 engine. It was the only option and it only came in one power output. It was mated as standard to a 4-speed automatic transmission. 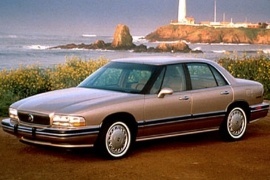 Buick introduced the seventh generation of the LeSabre in 1991 as a 1992 model-year and brought the luxury GM in the mid-priced sedan range.
The LeSabre was Buick’s best-selling model for years, and the refreshed version brought enough features to continue that trend. But for unknown reasons, its parent company didn’t grant him with a supercharged version, as it was its longer sibling Park Avenue.

Buick’s designers couldn’t decide if they should ditch the ’80s design trend with clear, boxy-looking bodyworks or if they should go for the new bio-design trend. As a result, the LeSabre was between those lines and showed a distinct shape of an ’80s car with soft lines and a few curved panels from the ’90s trends. The horizontal headlights were wrapped around the corners, with the turn signals at the bottom. Its sloped-down hood and raked windshield offered better visibility than its predecessor. In the back, the red taillights were surrounded by an arched chromed line at the top and a straight one at the bottom. The overall look was like a tuxedo made from denim.

Inside, it was a clear ’80s fashion with a vertical dash panel, slightly arched in front of the bench seat. The chromed, steering-column mounted gear selector featured the cruise control buttons. In the back, the flat bench offered enough room for three adults and adequate legroom.

Under the hood, Buick installed the 3.8-liter V-6 engine paired with a four-speed automatic transmission. The front-wheel-drive system worked well for the long vehicle but surely didn’t impress anyone with its 170 ponies.