After joining the General Motors Company alliance, the carmaker improved its vehicles and increased its production.
The Model 27 was an important step ahead of the former Model 41.

Buick was already a known brand on the market, and it managed to outsell other car companies. Its owner pushed harder to develop new products. The Model 27 was known for a few technical achievements, such as the on-head-valve distribution system, the comfortable suspension, and the bodywork quality.

Like the cars from its era, the Model 27 was a body-on-frame construction with a wooden bodywork. The front doors were optional, and they could have been removed and left at home if needed. The engine compartment featured a high, metallic construction with a big, vertical radiator at the front and the company’s badge mounted on it. Its headlights were oxyacetylene-based. On the car’s sides, the carmaker installed spare tires for the wood-spoke wheels.

The 27 featured a four-door bodywork with room for four passengers with bucket seats at the front and a bench in the rear. Its leather-wrapped interior offered a great comfort level. For the driver, Buick installed a speedometer and a four-spoke wooden steering wheel.

For the drivetrain, Buick installed a 3.3-liter inline-four engine with an on-head-valve and external push-rods distribution system. Buick’s engineers paired it to a 3-speed gearbox and multi-disc wet-clutch system. 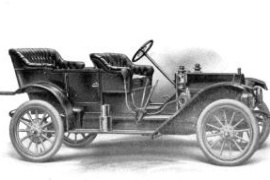