When Buick introduced the Model 32 Roadster in its lineup in 1911, it sold more than 1,100 units of it since it was the most affordable four-cylinder car in its lineup.
The carmaker was already known on the markets and a top-seller. Its top management pushed the R&D department harder to develop new vehicles and increase the market lead over its competitors, and the Model 32 Roadster deserved special credits for that.

It was a simple design with simple engineering solutions that proved their worthiness. The car featured an angular-shaped engine compartment. The front fenders were angular since they were cheaper to produce than the rounded ones. There were no doors nor rear seats. It was built on a shorter chassis version carried over from the Model 27. At the front, a brass logo adorned the radiator grille. Its headlights were oxyacetylene-based. On the car’s sides, the carmaker installed spare tires for the artillery wheels. In the back, Buick installed an oval-shaped fuel tank.

The 32 Roadster featured two bodywork with room for two with bucket seats. It was the sportiest affordable vehicle on the market, and those who already enjoyed the thrill of speed bought it. The dashboard featured a speedometer and a four-spoke steering wheel.

For the drivetrain, Buick installed a 2.7-liter inline-four engine with an on-head-valve and external push-rods distribution system. It was paired to a three-speed gearbox and a multi-disc wet-clutch system. 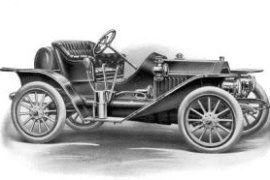