In 1911, Buick introduced a two-seat roadster based on the shortened chassis of the Model 39, following the same recipe applied on the Model 26/ Model 27.
With all its involvement in the motorsport arena, Buick tried to get more customers from those who didn’t need more seats but asked for more speed. While it couldn’t provide them bigger engines, it could offer them lighter vehicles.

The Model 38 was longer than the Model 26 built in the same era and was a mix between a sports car and a comfortable, two-seat vehicle. Some even considered it an ancestor for the GT category, even though the car didn’t have any doors or roof (yet, the roof and the windscreen were on the options list). Behind the seats, the Model 38 featured a 27-gallon (102 liters) tank. Like its four-door sibling, the 38 featured big, round headlights and a five-shape engine compartment with a distinct area for the radiator. Its wooden, multi-spoke artillery-wheels featured 36x4 pneumatic tires, which made the car more comfortable on the unpaved roads.

Its two individual seats featured side bolstering to protect its occupants. Buick installed two large dials in front of the passenger, and one of them was a chronograph. An ignition-timing switch took center stage on the dash panel. It was a race-car disguised as a street vehicle, with a rear-view mirror mounted on the right side, next to the hand-brake and the gear-stick.
Under the hood, the inline-four engine provided 48 hp, sent to the rear wheels via a three-speed gearbox and a chain. Buick produced only 153 examples. 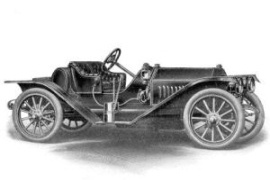