After two years since it was established, Buick Motor Co.
produced the Roadster C as its second model in Jackson, Michigan, and sold it in high numbers for those times.

In 1905 there were just 8,000 cars and only 144 miles (231 km) of paved roads in the U.S., but the customers started to understand the advantages of a horseless carriage. At the same time, Buick made a performance statement for 1905 with three records: a world’s record for the five-mile distance for 2-cylinder cars at Boston’s Readville track with a time of 6-minutes and 19-seconds, in New Jersey at a one-mile track got a 62-seconds la-time, and in a six-mile event was the overall winner.

Unlike the Cadillac, which was its main competitor, Buick offered a fresh look with a big brass radiator grille at the front. The hood’s rounded shape was considered modern as well. It featured brass headlights and an additional set of lamps on the cabin’s sides. A set of doors protected rear passengers, but not the front ones.

The Roadster C was a luxurious vehicle. It sported two bucket seats at the front and a bench in the back. Its four-spoke steering wheel made from brass and wood, offering a luxurious look. Since the car featured a high-chassis, the carmaker installed side-steps to ease the car’s ingress and egress. The car’s price was USD 1,200 while a modest home was priced around USD 2,000 and the average price of a horse was USD 70.37

Inside the engine compartment, Buick installed a two-cylinder engine that provided 22 hp. It was paired to a two-speed manual gearbox that sent the power to the rear wheels. 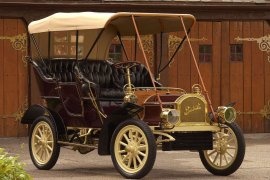