Chevrolet tried its last shot to the European market with a re-badged version of the Opel Antara sold under the bow-tie brand with the Captiva name.
In 2006, GM introduced a new compact SUV in various markets worldwide. It was sold under multiple brands, from Chevrolet to Vauxhall and Saturn. While in some countries the car made a good impression, in others it just didn’t fit. Struggling in the aftermath of the world economic crisis, Chevrolet refreshed the Captiva worldwide, including in Europe.

There was a new front fascia. Instead of the older, swept-back headlights with rounded edges, the 2011 model featured an angular, more masculine look. Antara’s taller grille featured a horizontal slat that supported the bow-tie golden badge. In the back, the design team decided to install clear lenses over the taillights.

Chevrolet improved the Captiva’s cabin as well. The designers installed a new instrument cluster where the fuel gauge and the coolant temperature dial were positioned between the speedometer and tachometer. A new infotainment system found its place on top of the center stack, with an improved navigation system.

GM updated the engines, and a new, 2.2-liter turbodiesel replaced the previous, 2.0-liter unit. It offered 34 more hp than its predecessor and, due to the new 6-speed automatic gearbox, it provided a lower fuel consumption. For the gasoline units, Chevrolet replaced the 3.2-liter gasoline unit with a newer, more powerful, 3.0-liter V6. But still, the car couldn’t save the Chevrolet brand on the European market. 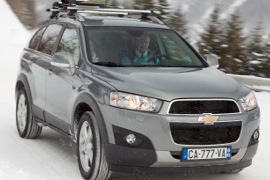