Chevrolet introduced the tenth generation of the Impala in 2013 as a 2014 model-year on the same platform as the Cadillac XTS and the Buick LaCrosse.
After parting with Opel and Saab, GM kept the Epsilon II platform in both versions with a short or long wheelbase. It was designed in Germany for front-wheel-drive vehicles and adapted in Sweden to support all-wheel-drive ones. Its most extended form complied with GM demands for a pre-premium car.

Chevrolet insisted on a fastback-like bodywork, similar to the one from the Opel/Vauxhall Insignia. Its sculptured side panels and the arched line over the rear wheels emphasized a sport-sedan image since it played in the big-car league against Honda Accord or Toyota Camry. Its headlights came fitted as standard with HID lamps and LED daytime running lights for selected trim levels.

Inside, the design team benefited from the long wheelbase and installed thick bucket seats at the front and a comfortable bench profiled for two full-grown adults in the back. The tall center tunnel made life difficult for a third passenger, and the carmaker didn’t even bother to install a third headrest. While the base trim-levels sported cloth seats, on the upper versions, the interior was leather-wrapped.

Under the hood, Chevrolet offered the Impala with a choice of four engines, including a hybrid version. The carmaker offered the car with a standard six-speed automatic transmission for the entire range. 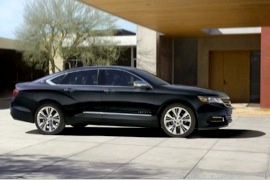