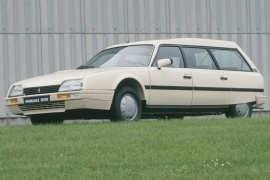 The final of the CX Break version appeared in 1985 and stayed on the market for six more years.
It kept the original car’s distinct appearance but changed the bumpers from chromed metal to plastic. Although this improved crash protection and shaved some kilograms from the total weight, the move wasn’t that well received by Citroen purists, who thought that the car had lost some of its elegance. The biggest change was in the interior though, where the “pod like” center console was replaced with a slopping one. Considering the cars were first released in 1974, they had lost much of their appeal during the years. 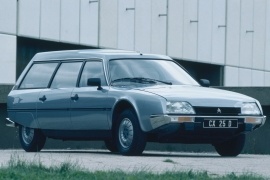 The last vehicle designed entirely by Citroen before the Peugeot takeover, the Citroen CX was marketed in Europe between 1974 and 1991.
Even from the beginning of its production the Citroen CX was appreciated, winning the European Car of the Year trophy in 1975.

The Citroen CX succeeded the legendary Citroen DS from which it borrowed its hydropneumatic suspensions. The engine was mounted transversely and tilted forward, a first in the market segment. With the new position of the engine, Citroen had to develop a new transverse gearbox which was later mounted on the Lancia Beta, Talbot Solara and others.

Even if it was shorter by 21 cm (8.26 inch) than the Citroen DS, the CX offered more interior room due to the new configuration.

The CX did not benefit from the hydraulic control of the gearbox that allowed manual gear change without a clutch pedal as the Citroen DX did.

Quite uncommon for the time, the Citroen CX featured standard 4-disc brakes, with vented discs at the front and also at the rear.

The exterior styling was the work of Robert Opron, inspired by the GS’ and the SM’s designs. Robert Opron succeeded to develop the new styling without making the CX look like a clone of another model.

In July 1982, the Citroen CX was slightly restyled and featured new names: CX 20, 20 TRE and 25 D. The exterior featured a restyled front mask, a flush grille and enlarged front bumper brackets. Inside, the cabin was fitted with new counter dials with orange numbers on a black background. 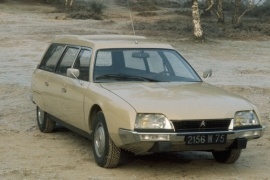 Citroen dodged the extinction bullet by joining the Peugeot group, but its projects went on, and the CX received a station wagon shape in 1975 as a 1976 model.
It was the last vehicle launched by Citroen before Peugeot took it over in April 1976, which already had almost 40 percent of the other French carmaker’s stakes since 1974. The evolution of the large executive car didn’t bother them and didn’t stop them, even though it competed against the Peugeot 405 Station Wagon in the European market.

Unlike its sedan, fastback sibling, the CX Station wagon was 10 cm (3.9”) longer and featured a rear liftgate with a flat loading area. The front fascia remained similar to the sedan version, but the car was different from the B-pillar behind. Its roof was raised above the rear seat passengers and more extended to the back. Citroen added a set of long side windows behind the rear doors.

Inside, the car featured the same front seats and dashboard as the sedan version. The carmaker installed a flat-folding and tumbled rear bench in the back, which led to a completely flat loading area. Moreover, there was no loading lip, and the trunk’s floor was flush with the rear bumper. Thanks to its raised roof, it was an excellent car for camping and transporting motorcycles standing up. Also, Citroen managed to install a third row of seats, increasing the cabin’s capacity up to eight occupants.

Under the hood, the carmaker offered a choice of four engines. Citroen provided only the 106 hp and the 115 hp gasoline engines at the launch, with the 128 hp version joining the range in 1978.