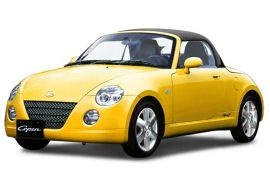 While the Japanese brand was known more for building off-road vehicles, its roots were deep into the kei-cars segment.
Using that experience, it produced the tiny roadster Copen.

The kei-cars segment was huge in Japan and the cars built in that category had to be small and with engines under 660 cc. Daihatsu took advantage of that when it built the Copen, but worked hard to make it according to the European regulations and sold it in the U.K. and other countries. But it didn’t prove to be successful.

The retro-design look with round headlights and a short height was part of the little roadster. The name, Copen, was a mix between Coupe and Open. The car featured a retractable hardtop made from aluminum to save weight. It was just like an SLK, but with a fraction of a price. It took it under 20 seconds to transform itself from coupe to roadster and it was cheaper than a hot-hatch. Its rounded forms resembled the cars from the ’60s.

The interior was cozy, with two seats and a curved dashboard with round air-vents. Daihatsu designers did a good job here by not mixing different forms. The four dials in the instrument cluster showed the basic, most important information for a sporty vehicle: revs, speed, gas, and temperature. The bucket seats offered enough grip for their occupants.

Daihatsu installed a 659 cc turbocharged gasoline engine paired to a 5-speed manual under Copen’s hood. After 2007, the Japanese carmaker brought an improved, 1.3-liter naturally aspirated unit. But it didn’t prove to be on the Europeans taste.