Nissan tried to make a move in the budget-car segment and launched the Datsun brand.
It was the same plan used by Renault with the Romanian brand Dacia. But Nissan chose its former name and a Russian factory.

The Renault-Nissan alliance had a big share in the Russian car-company Avtovaz from Togliatti, where the Lada cars were built. To speed-up the process, Nissan took the Lada Granta model, already in production, and enhanced it with help from the Japanese engineers. On April 4, 2014, the Datsun on-DO was launched in the presence of Carlos Ghosn, the Renault-Nissan Alliance president at that time.

It was hard not to notice that the Datsun on-DO was, in fact, a re-badged Lada Granta. The bodywork was similar. A honeycomb grille and angular headlights brought a fresh design look to the Russian car. Strangely though, the Granta was kept under production. In the back, the on-DO featured corner-mounted taillights, with an angular shape to match the headlights.

Inside, some of its features were carried over from the other budget-car in the Alliance, the Dacia Logan. The on-DO used the same instrument panel and other switches and controls for headlights, HVAC, and gearstick. On top of that, since the car had to be fit for the hard, Russian, winters, it featured electrically heated front seats and windshield. On the options list, Datsun installed parking sensors and an infotainment system with navigation included.

From the technical point of view, the on-DO offered a choice of a 1.2- or a 1.6-liter gasoline engine mated as standard to a 5-speed gearbox. 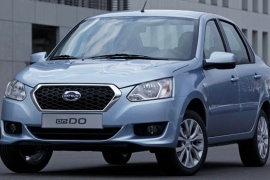