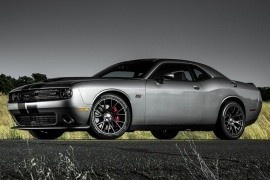 The Challenger name returned on the pony-car battle in the U.S. in 2008 and it was constantly updated. The 2015 model came with a facelift and with a more powerful version: the SRT.

The Dodge Challenger was launched in a bad time when the world economy was on crisis and that didn’t help the Chrysler finances at all. In 2011 most of Chrysler’s shares were bought by Fiat and, in 2014, the FCA (Fiat Chrysler Alliance) was formed. Even if the Italians had some of the finest engine magicians in the world, they couldn’t say no to what the American market wanted: a big, push-rod V8 engine under the hood of a car named Challenger.

The look of the car was mean even in its basic form with a small V6 under the hood. But the V8 SRT versions were even meaner. The Challenger was offered as the SRT 392 and the SRT Hellcat. The dual snorkels on the hood of 392 version resembled the 1971 Dodge Challenger and the wide and narrow grille featured the Challenger name on it, instead of Dodge. The Hellcat featured only one, bigger central air-intake. For the Hellcat, the inner driving light on the front left was replaced by an additional air intake to feed the 707 hp engine.

Inside, the dashboard for both versions resembled the design of the 1971 Challenger, with big and round analog dials, but with a TFT display fitted between them and an infotainment unit on the center stack.

One of the most important improvements for the car was the introduction of the 8-speed automatic transmission, which replaced the older 5-speed automatic. With some help from the European partners, the handling was improved so the car was no longer a drag-strip only car. 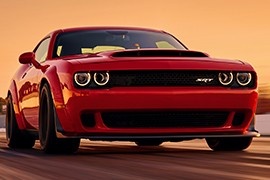 Most carmakers don’t even try to make a ten-second car, but Dodge decided to build one and overtake most supercars on the planet on the drag-strip.
While the European sportscar makers were trying to develop advanced suspension systems, enhance the dampers and tune the springs to ridiculously small details, Dodge introduced the SRT Demon for the Challenger and got banned from the drag-strips all over the country. NHRA forbids a car to enter a race if it can perform a sub-ten second run and is not fitted with appropriate safety devices. And the Demon was just a standard coupe.

The Demon sent a shock-wave through the market when it was tested on the track and, with its whining supercharger engine, stopped the clock at 9.65 seconds. Its wide gap on the hood and the two air-intakes that replaced the inbound headlights made the scream sound louder. Its lowered front end, fat rear tires, and slim front ones made it look like a hot-rod. And it was.

Inside, the Demon looked similar to its regular Challenger siblings but in standard mode featured one seat: for the driver. The side seat was offered as an option for one buck, and the same went for the rear bench. Dodge left the infotainment system installed to help the driver go through specific tuning sequences before starting a race and the AC to cool the air-intake manifold. While in standard mode, the Demon produced 707 hp, in full race mode with racing fuel, it unleashed 840 hp.

The Demon was the first production car that could perform a wheelie, lifting its front axle from the ground when launched. It also featured special technologies developed by the SRT department to help drivers achieve those sub-ten seconds times on the drag-strip. 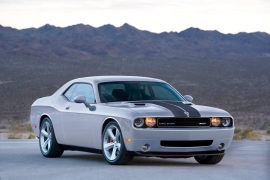 The Challenger SRT8 is an emblematic American muscle car.
Featuring a vigorous look that builds on the design lines of the first model from back in the 70’s, the 2008 Challenger SRT8 boasts a 6.1L HEMI V8 engine which develops 425 HP. The American producer focused this time on handling as the first Challenger scored very bad in this aspect, so it fitted the SRT8 with a sport suspension, limited-slip differential, Brembo brakes and 20” alloy wheels. The SRT8 also comes as standard with desirable features like heated leather seats, bi-xenon headlamps, cruise control and keyless go.