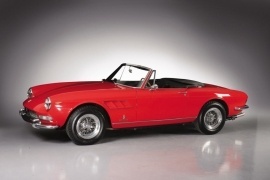 It was the open-top version of the GTB, but it was more of a GT than its closed-body version.
It was not meant for racing. It was meant for driving pleasure.

Pininfarina was one of the finest design geniuses in the world, and he left a legacy that continued with a long line of successful models for Ferrari. The GTS was just one fine example. Its beauty came from simple lines, but it was not boring.

In the ’60s, most of the cars featured round headlights. It was an engineering limitation for that and Pininfarina took that into account. But it lowered the hood, creating a sharp nose over the grille. A chromed, slim bumper was placed as low as possible. On the fenders, behind the wired wheels, a set of exhaust vents were installed. They mimicked the shark breathers. A slim A-pillar and the windshield were the only elements that stood out over the curved beltline.

Two seats, a steering wheel and a gearstick were all that a driver would need for a relaxed drive, but Ferrari offered some more. There were more dials than an ordinary car need, but the Ferrari GTS was not a common roadster. Four dials were in front of the driver and another three were closer to the passenger, and there was no radio. The music had to be sung by the V12 engine.

Under the hood, Ferrari engineers tuned the GTB engine to produce 20 hp less but widened the torque band. Thus, the car was easier to drive. But it still was a very fast car for its time.

1The Ferrari 275 GTB was one of the best cars ever built by the Italian car manufacturer, related to the time it went out on the market.
And that’s made it a favorite for many.

Ferrari was in its high times in the mid-’60s. The prancing horse brand was winning races after races, and it was the most desirable sports car in the world. The 250 model was a hit, but it was already aging. Then, in 1964, the Maranello car manufacturer introduced the 275 GTB.

The 1964 version, also known as the “short nose,” featured the bodywork’s long and curved lines. It was an aesthetic masterpiece, but soon they found a big flaw in the aerodynamic department. At higher speeds, the nose was slightly lifting. Ferrari fixed that issue in 1965 with a longer nose and a smaller radiator grille.

Ferrari 275 GTB featured a luxurious interior with leather upholstery all around. Even the rear shelf, used for luggage, was covered in leather, and the carmaker offered a set of bags and suitcases to fit the area. Ferrari installed roll-cages in some vehicles for the customers who wished to race their cars on the tracks. But the 275 GTB was more of a tourism car than a racing car, even though it could do both.

Under the hood was a sequel of the Colombo engine used by Ferrari since the ’50s. The 3.3-liter V12 was offered with a choice of three or six double-barrel carburetors.