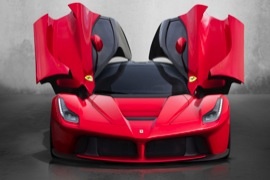 The first hybrid Ferrari hypercar was shown at the 2013 Geneva Motor Show and the limited production of 499 vehicles for the Ferrari LaFerrari made a statement for excellence.
Sometimes, the expression “we took our experience from the track to the street” is not just an expression to sell more cars. For the Italian car-manufacturer Ferrari that was true. Its experience in the Formula One team and with the KERS systems helped the engineering team to develop the LaFerrari.

The aerodynamics of the car was studied and inspired by F1 cars. The front bumper hosts two large air-scoops separated in the middle by a vertical reinforcement. Two air-vents on the short front hood are responsible to cool the front radiators. The very short greenhouse was extended to the rear, in a beautiful shape to host the engine bay.

The interior featured Alcantara on the seats and the dashboard. The seats were bolted to the car and to adjust the driving position, the steering wheel and the pedals were moving back and forth. This system was adopted to install the seat lower and to lower the roof.

The real revolution was on the drivetrain. Unlike other hybrid super-cars or hyper-cars, the LaFerrari uses the V12 engine all the time. The electric motor is there only to help it under hard acceleration, like in Formula 1 cars. It stores the energy recovered during braking into a small battery pack placed in the middle of the car on the floor. Because LaFerrari wasn’t a hybrid hypercar. Was a hyper-car with real race-technology. 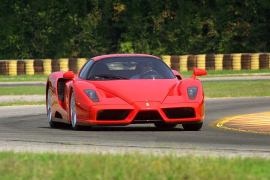 To buy a Ferrari Enzo, someone should receive an invitation to acquire it.
It was the most exclusive car ever built by the Italian super-car manufacturer. Only one was for open sale and it was offered in a charity auction.

Ferrari introduced the Enzo at the 2002 Paris Motor Show. It was a tribute paid to the founder of the company, Enzo Ferrari. While the company said that it wasn’t a race-car for the road, it was actually an F1 car for the road. With its in-board suspension system, with the F1 gearbox and the aerodynamic package that added up to 7602 Nm (1709 lb-ft) of downforce at 300 kph (186 mph), it was faster than any race-car built for the road.

The design was dictated by aerodynamic. The sharp nose with side pods for the wheel arches, the huge air-intakes for the engine and the fighter-jet style cockpit were gathered together by Ken Okuyama, the head of design from Pininfarina. A last touch of the master were the four round taillights, which looked like they were carried over from an old Ferrari designed by the Enzo himself.

Inside, the car kept the bare necessities. A steering wheel with a lot of buttons for setting up the car, two carbon-fiber seats covered in Alcantara, exposed carbon-fiber dashboard and some bits and pieces of aluminum intentionally left uncovered. The Ferrari Enzo didn’t even have floormats.

The engine was a 6.0-liter V12 engine that offered 660 hp. It was naturally aspirated and it was installed in the middle of the car, with the gearbox attached in the back and the suspension attached to the gearbox. It was the same as in the Ferrari F50 or in any Ferrari F1 race-car in the last 30 years. Only 399 were sold to selected customers and one was auctioned at Sotheby’s for USD 1.1 million. 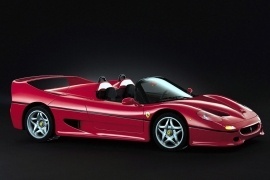 The F50 was one of the most outrageous Ferrari ever made.
It carried-over Formula 1 technologies and installed them on a street vehicle.

Ferrari built 349 units, but it sold only 348 of them. The carmaker reserved the last one for its museum. The engineers took the engine from a Formula 1 car and adapted it for road use, increasing its displacement from 3.5-liter to 4.7-liter. The rear suspension was attached to the engine, which was an incredible idea to make the car lighter.

The car’s styling was unique on the market due to its massive wing in the back. Pininfarina designed the vehicle with a pair of extracting vents on the front compartment’s lid. The aerodynamic package was intense, and it produced a negative lift for the car, which was the main reason why the car couldn’t do more than 202 mph (325 kph).

Inside, the carmaker dropped the ideas from the F40 and added some comfort features, such as door-handles and door-pockets. The windows were still cranked, with no power options for them. The bucket-seats were race-inspired with high bolstering and Alcantara wrapped. Since it was a supercar, Ferrari didn’t consider covering the carbon-fiber elements with leather or other exclusive materials.

Under the hood, which was in the rear, Ferrari installed a naturally aspirated V12 engine paired to a six-speed manual gearbox. It produced an impressive 110 hp/liter, which was a record for those times. That record was broken a few years later by the Honda S2000 with 120 hp/liter. 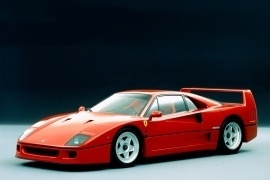 In a crowd full of journalists, Ferrari Enzo said: “I expressed my wish to the engineers.
Build a car to be the best in the world. And now the car is here.” The F40 was the last ever Ferrari model to be presented by Enzo himself, just 14 months prior to his death.

With a twin-turbo V8 and a lightweight construction, it didn’t lack any punch and it was also crowned the first ever production car to break the 200 mph barrier, its reputation being threatened only by the Porsche 959.

Aerodynamics played a major role in developing the Ferrari F40, as the car relied on this more than its brute force to achieve top speed, achieving an impressive 0.34 drag coefficient back in its time. Designed by Pininfarina, the body featured panels made of kevlar, carbon fiber, and aluminum for strength and low weight. Early models came with fixed windows while the roll-down version came later. Also, the F40 was sold without a catalytic converter until 1990 when regulation made it necessary. 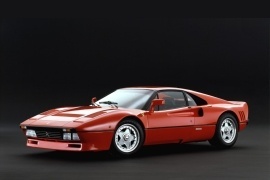 Ferrari fans already know that the GTO nameplate was not given to just any car.
The Ferrari 288 GTO unveiled in 1984 at the Geneva Motor Show was the successor of the famous Ferrari 250 GTO, the most valuable collector car in the world.

Built solely for racing, the 250 GTO was produced in a total of 36 units and was fitted with a formidable V12 unit that cranked out 296 hp.

The then-new Ferrari 288 GTO was visually similar to the Ferrari 308 GTB, from which it borrowed its base construction principle. Even if from afar it was hard to tell the difference between the two, the 288 GTO was redesigned for a more aggressive look, but the changes were also functional.

With the Ferrari 288 GTO came an astonishing V8 unit that developed no less than 400 hp, with the sports car accelerating to 100 kph in around 4.8 seconds.

Inside, even if the 288 GTO was focused on performance, it still featured a luxurious cabin with suede-wrapped dashboard, carpeting and leather seats as standard. Optional features included air-conditioning, power windows and a cassette stereo.

Produced in 272 units, all 288 GTOs were painted red, but 1 prototype was painted yellow by Ferrari’s official coach-builder, Pininfarina.