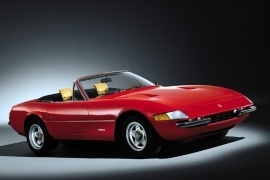 The Ferrari 365 GTS/4 was also known as the Daytona, celebrating the 1-2-3 victory at the 1967 Daytona race, and it was one of the most revolutionary vehicles in the Italian carmaker history.
Ferrari introduced the GTS/4 as the open-top version for the 365 GTB/4. The name might seem mesmerizing, but it actually said that the engine featured a 365 cubic centimeters/cylinder ant the /4 represented the four cams per cylinder system. Back in the ’60s, that was a rare feature reserved only for a few vehicles. The GTS meant Gran Turismo Spider, unlike the GTB, which meant Gran Turismo Berlinetta. But its nickname overtook the official name until it started to be used by everybody.

From the outside, the outrageous GTS/4 featured a sloped front end with pop-up headlights. Leonardo Fioravanti designed the car for the Pininfarina studio, and it was at least a decade ahead of its times. Imagine that some carmakers still used to make fixed, round headlights attached to their cars. The car’s long lines, with a gentle wave on the sides with just a small hump over the rear wheels, was a timeless beauty. Its small, round taillights were typical for the Ferrari brand.

Inside, the carmaker installed a luxurious interior with sport bucket seats and wrapped everything with expensive leather. Ferrari installed an aluminum dash panel inside the instrument cluster with eight dials and gauges inside. But the carmaker stated that the 365 GTS/4 was just a Gran Tourismo vehicle, not a supercar, even though it was the fastest car that could be registered for road use.

Under the hood, the Italian engineers installed a 4.4-liter V12 engine that provided 352 hp. It was fed by six carburetors and paired to a 5-speed manual gearbox. 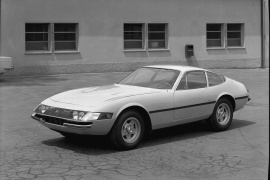 Unofficially called the “Daytona” after Ferrari’s 1-2-3 finish at the 1967 24 Hours of Daytona, this model is the one that was about to stop the mid-engine revolution that the Miura had started.
This front-engine design with lines drawn by Pininfarina, the 365 GTB/4 entered in history after being presented at the 1968 Paris Auto Show.

The 365 GTB/4 replaced the 275 GTB/4 and was available as a coupe or spyder (GTS/4). Power came from a two-carburetor 4.4 V12 engine mated with a 5-speed manual gearbox mounted in the rear to optimize weight distribution. Four-wheel independent suspension and disc brakes on all corners were all part of the recipe.

Although designed by Pininfarina, the Daytona was looking closer to what Lamborghini had to offer in that period, with its sharp style and large arcs defining its overall shape. Early models had their headlights behind clear plexiglass covers, but the law in the US banned them quickly and the flip-up style got adopted.

Produced in 1,285 units, the Ferrari 365 GTB/4 got famous after it was driven by Dan Gurney and Brock Yates in the inaugural Cannonball Baker Sea-To-Shining-Sea Memorial Trophy Dash in 1971, showcasing the grand tourer’s potential. They achieved an average of 80.1 mph (129 km/h) and did the New York to L.A stretch in 35 hours and 54 minutes.