Essentially an open-top, roadster version of the 812 Superfast, the Ferrari 812 GTS hasn’t had a direct predecessor for over half a century.
To be more exact, save for a few special limited edition models, Ferrari last offered a convertible with a front-mounted V12 engine back in 1969, with the 365 GTS4, also known as the Daytona Spyder after Maranello’s victory at the 1967 24 Hours of Daytona.

The model uses a retractable hardtop that can be opened in just 14 seconds and at speeds of up to 45 kph. Its electrically heated rear screen also acts as a wind-stop when the top is down, keeping the interior wind-free in convertible mode. Since the car is based on the 812 Superfast, most of its technical details are borrowed straight from the grand tourer, including its screaming naturally aspirated V12. The 812 GTS powertrain develops no less than 800 horsepower and 718 Nm of torque, while the rev limit is a stratospheric 8900 rpm. Despite being high-revving, approximately 80 percent of its maximum torque is available at as low as 3500 rpm for improved drivability at lower speeds. Despite a weight increase of 75 kg, caused by the extra strength added to the chassis, the Ferrari 812 GTS can accelerate almost as quick as the 812 Superfast. It can go from 0 to 100 kph (62 mph) in under 3 seconds, while its top speed is identical to the berlinetta at 340 kph. 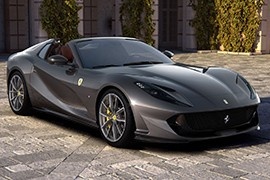