The most sold roadster in the world received an Italian heart and a different face that transformed it from a Mazda MX5/Miata into a Fiat 124 Abarth.
The Mazda MX5/Miata was a long time champion as the most sold roadster in the world, long time after the original Fiat 124 Abarth was a glorious name on the car arena. Fiat and Mazda joined their forces and developed a car that could have been offered as an MX5 or as a 124 Abarth. It was something more than just a badge-engineering.

From the exterior, the round headlights and wide grille resembled the original Fiat 124 Spider from 1966 styled by Pininfarina. The classic look of the car was different than the one on the Miata, which was styled by Masashi Nakayama. The low beltline and the almost vertical A-pillars gave the car a simple, clean aspect. In the back, the 124 GT Abarth featured four exhausts on the sides and a diffuser under the bumper.

Inside, the Italian cousin of the MX5 featured Recaro sport-bucket seats, but most of the interior was carried-over from the Japanese model. Both cars were built in Japan, in a Mazda factory. The instrument cluster was slightly different, with a big and red tachometer in the middle. The car didn’t feature a power-roof. It was manual, but it needed less than 5 seconds to open or close it.

Under the hood, the Fiat 124 GT Abarth featured a different engine than the Japanese version. It featured a 1.4-liter turbocharged engine and it produced more torque and more power than the MX5. Moreover, the gearbox was different, even though it was a 6-speed as well. 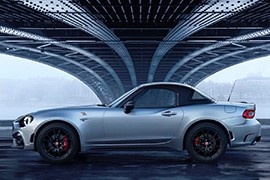