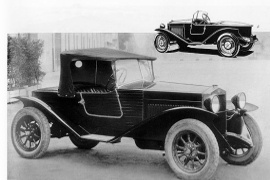 Fiat tried to conquer a bigger part of the market with the economical 509 model, which the carmaker offered it with one-year insurance.
Apart from the standard version, it offered a sportier model: the 509 S.

In 1922, the fascist party of Benito Mussolini came into power in Italy. There were new rules, and the new government pushed the carmakers to build vehicles for the masses, easy to buy and run. Fiat, as the main manufacturer, produced the 509 model with a one-liter engine displacement. It was able to carry four passengers inside a cabin. At the same time, it offered two sporty versions: the S and the SM. The former was a two-seat convertible, while the latter was mostly a race car.

The 509 S featured the same tall design with the leaf-spring mounted under the ladder-chassis. A boxy-looking engine compartment with flat surfaces and a V-shaped hood was similar to the one on the four-seat, closed version of the 509. The headlights were mounted on a bar installed between the wheel arches. A flat, vertical windshield with up-mounted wipers protected the passengers. The roof could have been folded behind the seats in front of the trunk. Unlike other cars on the market, Fiat installed the spare-wheel behind the car, on top of the rear bumper.

Since it was a sportier car than the sedan, the 509 S featured a 27 hp engine paired to a 4-speed manual gearbox. Power went to the rear wheels via a driveshaft.