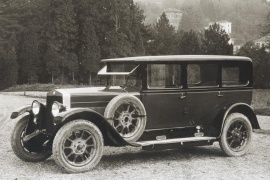 In 1922, Fiat changed the Typo 3 model with the 519 range, built as a sedan (Berlina), limousine, four-door cabriolet, and a roadster.
Only four years had passed since the end of WWI, and the Italian economy started to recover. Fiat, encouraged by the sales on its home-market, started to adapt to the customer’s needs better than anyone else. Its engineers developed new engines and technologies able to make the cars easier to drive than other brands. But the 519 was not the success that the company hoped for.

In the ’20s, the cars looked very similar to another, but Fiat tried to make things different. It adopted a V-shaped radiator instead of the already established squared ones. It placed the spare-wheels on the side-sills, behind the front wheels, and built a greenhouse with straight and flat elements. Some versions featured an open area for the driver and enclosed for the rear passengers (Coupe de Ville). An option was the swing-out front window. The upper part allowed more fresh air to enter the cabin.

Fiat took good care in choosing good material quality for the interior. The car was offered with leather upholstery or with cloth seats.

The biggest upgrade was for the technical part, where power drum-brakes were introduced for the entire range. Another significant upgrade was found on the engine. It featured an inline-six unit with on head valves. It was paired to a four-speed manual transmission.