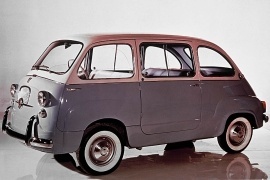 The family minivan was not born in the U.S. Italians had it in 1955 when Fiat introduced the 600 Multipla.

Fiat introduced the 600 range in 1955. While a new, larger vehicle than the 500 was something normal, the Multipla version was a shock. It was the shortest six-seat vehicle on the market and, moreover, it was very easy to drive it around town. Even though it was just about 50 cm (19.6”) longer than its four-seat sibling, the regular 600, it offered two extra seats.

From the outside, the car was unusual with its tall front area. It looked like a rolling wall split in half with a glass-covered upper area and a pair of headlights on the lower side. Its chromed bumper looked more like handles than protection elements, but they worked. The rear-hinged front doors and the front-hinged rear doors allowed an easy ingress and egress to the car from its sides. In the back, Fiat made a sloped design that mimicked the lines from the regular 600, even though it was not the same.

The interior featured the same dashboard as its sibling, with only a speedometer, a coolant temperature gauge, and a fuel level. For low oil pressure, low charging, or turn signals, it featured additional lamps. There was room for two at the front, another two in the middle row, and two jump seats in the back. The car was transformed into a tent with a hardtop and side windows by lowering all of them. When not used, the jump seat area served as a trunk.

Fiat took only part of the 600 platform. It installed the front suspension from a Fiat 1300, which offered a much better ride and steering. Its four-speed manual gearbox was the only option.