Fiat unveiled the Argo in Brazil in 2017 as a replacement for the Palio range and brought more styling to the carmaker’s small-segment vehicle.
While the original Argo was a giant with one hundred eyes, the car was on the exact opposite side, with fewer eyes and small size. Fiat decided to look closely at the Latin American market and developed a vehicle according to their needs.

Most of the affordable econobox cars featured a design that looked cheap. Fiat decided to end that trend and worked harder to transform the Argo into a handsome vehicle. Its swept-back headlights sported an elaborated design, usually reserved for much more expensive cars. A black mesh grille made the car looks sportier. Fiat added a pair of fog lights and fake side-scoops in front of the wheels on the bumper. The sculptured door panels created a modern look from the sides, while the ascending beltline that emerged into the raked C-pillar completed the dynamic appearance.

Inside, Fiat installed a modern-looking dashboard, with a 7” touch-screen placed on top of the center stack and a TFT display inside the instrument panel, between the tachometer and speedometer. It wasn’t a big car, so the Fiat had to handle somehow to fit five adults inside. The front seats were fine, but the bench was wide enough only for three skinny adults.

Fiat offered the Argo with a choice of four engines with either ethanol or gasoline. It paired them with a five-speed manual, while the 1.8-liter HGT engine was available with an automated six-speed gearbox with paddle shifters behind the steering wheel. 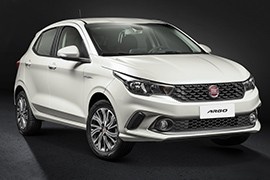