Fiat introduced a station wagon version for the re-born Tipo lineup in 2016 and brought more space into the budget-car segment.
The Italian carmaker dug deep and retrieved the Tipo nameplate from its files in 2015, two decades after the last Tipo 1 rolled out from the assembly lines. Unlike its predecessor, it was a three-box sedan. The station wagon and the hatchback followed it in the following year. Fiat chose to build the car in Turkey to lower the manufacturing costs and compete against other budget cars from the market.

While the European market was focused on crossovers and SUVs, a significant number of customers were more interested in econobox cars, such as the Tipo. The station-wagon shape offered bigger trunks than a regular, compact-segment hatchback, but at a lower price. At the front, it featured a 3D pattern for the grille and swept-back headlights. Up to the B-pillar, it shared the same panels as the sedan. The carmaker ended its extended roof towards the raked-forward D-pillars at the back. To ease the loading and unloading, Fiat installed a low and flat trunk sill.

Inside, the carmaker installed an upgraded dashboard and, as an option, a larger screen for the infotainment unit compared to the sedan version. At the back, the Tipo station wagon offered 550 liters with the rear split-folding bench in an upright position.

Under the hood, Fiat offered the Tipo with a choice of diesel and gasoline engines ranging between 95 hp and 120 hp. 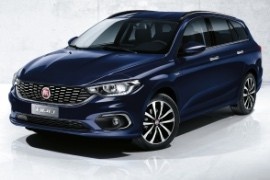