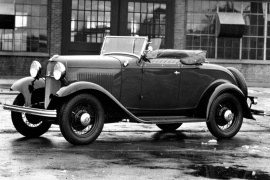 The Ford Deluxe might be considered the father of the hot-rod revolution, and it was one of the most representative American classic cars.
After the Model A, Ford introduced the Model B, Model 18, and Model 46. They were similar in many aspects, but the De Luxe Roadster V8 was based on the Model 18 version. It was the equivalent of a personal luxury roadster from those times, and it represented a social status more than just a regular car.

The De Luxe Roadster was introduced in 1932 as a version of the Model 18. Ford installed a greyhound on top of the radiator’s cap instead of its regular, blue-oval badge. The tall and chromed radiator’s rim and the vertical slats were typical for the Model 18. Between the front fenders, the constructor installed an arched bar where the headlights were mounted. Thus, it managed the vibrations issues that damaged most of the headlights from those times. A particular feature of the Roadster was the rumble-seat behind the cabin, which was covered by a rear-hinged lid.

The interior featured leather seats and door panels. On the dashboard, the dials were installed in the middle, in a chrome-plated panel. It was a two-seat vehicle with a bench for the occupants.

Under the hood was the famous Ford-flat, or flattie, V8 engine with side valves. It was a very reliable engine and featured an electric starter motor. The transmission was a 3-speed manual.