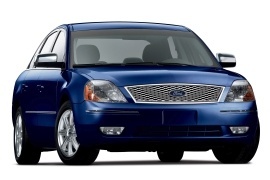 Born as a replacement for the Taurus, the Five Hundred recalled the Fairlane 500 nameplate from 1957.
The Five Hundred was based on the D3 platform, which was, in turn, an evolution over the Volvo’s P2 architecture. Despite its numerous qualities, including an AWD version, the Five Hundred didn’t get too much attention from the public, and its sales were below expectations.

It was the New-Edge design era for Ford, and it tried to apply the same language for all its lineup. While in Europe, the Focus and the Mondeo already showed that style with long, curved lines combined in sharp angles, in the U.S., that trend was not so obvious, but it was successfully applied on the Five Hundred. Its grille resembled the same shape as the European Ford Mondeo, and the fog lights were similar to those installed on the Focus. The roofline described an arch that connected the hood to the trunk lid. Ford’s designers installed a third window between the C- and the D-pillars.

Inside, the Five Hundred offered plenty of space for up to five passengers. They were protected by one of the best unibody construction on the market to date, with supplementary protection areas at the front, sides, back, and roof. The interior design featured wood-trims on the dash, doors, and center stack. Its rounded instrument cluster resembled the one fitted in the Mondeo.

Under the hood, Ford installed one engine option: a 3.0-liter V6. It was paired to a five-speed automatic transmission. Power went to the front or all corners.