Ford introduced the 2022 Ford Maverick for the North American market in June 2021 as a compact pickup vehicle.
The blue-oval brand aimed the new vehicle at those who thought a mid-size pickup was too big for their needs. Maverick was not only smaller, but it was also lighter and offered a better fuel efficiency than an F-150, for instance. Ford claimed that it could get up to 40 mpg-US (4.6 l/100 km).

Ford adopted the form-follow-function design for the Maverick. Its squared-looking body confirmed it. The front fascia featured a black grille above the bumper crossed by a twin-slat chromed trim, which supported the Ford badge in the middle. A pair of squared, LED headlights with clear lenses for the turn signals resembled the bigger F-150 brother. The body-colored plastic bumper sported a black area on the lower side so that the driver wouldn’t worry about minor scratches over it. On its sides, the four wide-open doors allowed an easy ingress and egress, while at the back, the 4.5 ft (1.4 m) wide bed could get a few sheets of plywood strapped together and leaned against the adjustable tailgate.

Inside, the Maverick offered room for five on two seats at the front and a bench for three in the back. The dashboard was made out of recycled materials and sported an SYNC3 infotainment unit, which supported Android Auto and Apple CarPlay. Its instrument cluster was completely digital. Between the front seats, Ford installed a rotary knob for selecting the driving programs. There was no gear stick around. Under the rear seats, the Maverick featured two storage areas for small items. 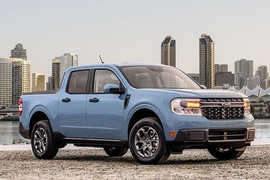