It had the name of its bigger brother F150 and the heart and veins (engine and gearbox) of its family-oriented sibling Edge.
But the Ford Ranger Raptor stood proud on its own, muscular, feet.

For many years, Ford enthusiasts were crying for a Raptor version. The 450 hp F150 Raptor was seen as the ultimate road-warrior and, when the road ended, it could go as fast as before. But in 2018 the Ranger Raptor was designed and launched for all the world.

On the front, the Ranger Raptor featured the same design from the F150 Raptor with FORD letters embossed on the grille. The front-bumper was mounted on the frame for durability. There are some new headlights too. The fenders had flared wheel-arches to make room for the 285/70 R17 tires. same goes with the rear fenders. The Raptor was 1873 mm tall (73.7”) and 2180 mm (85.8”) wide. On the side, there were side-steps made of steel to be used as rock-sliders. And that was factory equipment!

Inside, the Raptor was the same Ranger with few details to stand out. At the start of the vehicle, the TFT display between the dials inside the instrument cluster showed a “Ford build for though” animated gif and on the infotainment system, at start-up, it also shows the “Raptor” theme with a honeycomb grille in the background. The Raptor name also appeared on the seat-backs of the bolstered front seats.

The technical part is far more than the spec list. The new Fox-racing allows a higher suspension-travel and cope better under hard punishment, on jumps and landings. The reinforced suspension overall was made for endurance. 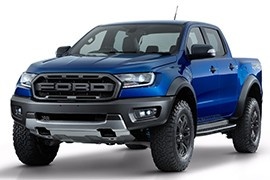