There was a time when cars were just cars.
But by the end of the 50’s, things seemed to change.

People were looking for more luxurious cars with distinctive exterior designs. The 1958 Thunderbird was one of them, Ford’s first 2-door personal luxury car.

Robert McNamara, president of Ford Motor company, was the first automotive executive to study trends, having a great ability to anticipate customer’s needs and wishes. Not only the Thunderbird was highly successful, so were the Lincoln Continental and the Ford Falcon that were later released.

While Ford’s vehicles featured only 2 seats by then, McNamara realised that adding a back seat would increase the vehicle’s appeal and practicality. Besides that, the sales even doubled overnight.

Aesthetically, the Thunderbird had a beautiful loose square styling. We could say it featured lots of chrome accents, but it was rather a vehicle showered in chrome, a note of luxury at the time.

Later seen with most muscle cars, the Thunderbird had a hood scoop.

The square bird was equipped with a V8 engine, with 4 barrels carburettors and a dual exhaust. The unit cranked out 300 hp and was mated with a 3-speed manual or a 3-speed automatic transmission.

Inside, the Thunderbird looked way ahead of its time with the front bucket seats and the stylish rear seats. The luxurious sporty car featured round simple gauges with chrome details and even power windows with the controls placed on the central console. 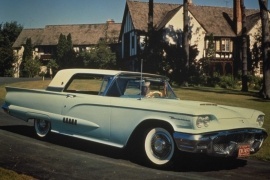