The second generation of the Thunderbird was born in the jet-age era, where the new fighter-jets heavily influenced car design.
Also known as the Square-Bird, the second generation only lasted for three years between 1958 and 1960, and it was an absolute success. Ford tried and succeeded in placing the T-Bird in the personal luxury car segment. The car was big and comfortable, and it also had some muscles under the hood, while the unibody construction made it lighter than its main competitors.

The car featured a special headlight casing, which mimicked the shape of an eagle eye. Most of the front fascia was covered by the big, chromed bumper, which was extended to the sides. The curved windshield and the sidelines followed the same idea of jet-age design trend. Its rear quarter panels featured fins on the trunk’s sides, like some winglets on a plane. Behind, the three, round lights for each taillight were part of a thruster-like body panel.

The interior was big enough for four adults, with four individual seats inside. All four windows were cranked even if it was a coupe. On the dash-panel, the carmaker installed three large dials, and there was no tachometer. Ford Thunderbird found its niche market for those who didn’t want to race the cars but enjoyed the drive.

Under the hood, Ford installed a choice of two, V8 engines. While the smaller one offered a 5.8-liter displacement rated at 300 hp, the other option was the Interceptor engine: a 7.0-liter V8 rated at 350 hp. Both versions were paired to a standard 3-speed manual, while a 3-speed automatic was on the options list. 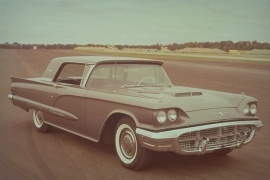