The fourth generation of the T-Bird evolved into a personal luxury coupe, and it stepped away from its previous sporty image.
That credit went to the newly launched Mustang.

By the mid-’60s, the Thunderbird was already known and respected both on the streets and in car culture. It was the car that made Corvette looks foolish, and it did that while offering a higher level of comfort. Although, with the fourth generation’s introduction, it was clear that Ford didn’t want to fight with the Corvette, at least not with the T-Bird.

The fourth-generation was a four-seat coupe longer than many four-door sedans. But Ford didn’t care about that. It cared about image, comfort, and performance. Its long, wide, and flat hood was extended over the front dual-headlamps. The headlights clusters mimicked an eagle eye with their shapes, while the raked-forward grille created a dynamic, not sporty, image. The Thunderbird was offered as a hardtop coupe or as a convertible with an electrical opening mechanism carried over from the Lincoln Continental.

Inside, Ford installed comfortable seats and a dashboard that featured an extended lip on its upper side. The generous, wide speedometer took the top side of the instrument panel, while the other four gauges were lined-up underneath it. Thanks to its generous wide and wood-trimmed center console, it created a luxurious image that was hard to beat by most of its competitors. That’s why Ford sold the T-Bird in over 200.000 units in less than three years.

Under the hood, Ford installed a 6.4-liter engine that provided 300 hp. In 1966, the carmaker improved that engine and offered it with 315 hp and, for those who were still missing the punch of its predecessors, it offered a 7.0-liter V8 with 345 hp. 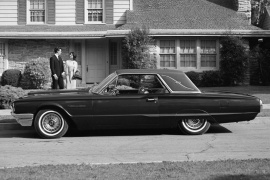