Fighting with its nimble brother Mustang proved to be more challenging for the Thunderbird, and Ford tried to improve the lineup to keep its customers.
Every now and then, a carmaker founds itself facing an intriguing problem with two vehicles from its own stable fighting against each other on the market. When Ford faced that dilemma with the Thunderbird and Mustang, it decided to adjust them for different market segments. The T-Bird was upgraded toward the personal-luxury coupe customers while the Mustang was the pony-car that made the teenagers happy.
The fourth generation of the Thunderbird might be the best-known from the nameplate’s history, thanks not only to its seductive lines but also as starring in movies. While the model was introduced in 1964, it couldn’t be changed too much, but the carmaker tried to make it more luxurious. Ford added a fake extracting vent behind the front wheels and a different air-intake on the hood, which was functional on the exterior.

Inside, the Thunderbird was available with power-seats, air-conditioning, power steering, and brakes, plus an AM radio in it. The speedometer was still with a colored ribbon that slid and filled a linear gauge. Thanks to its new luxury items, the Thunderbird became more attractive for customers in the personal-luxury segment, and Ford managed to sell over 200.000 units in less than three years. A special feature was the sliding steering column, which the driver could slide to the right to ease-up the ingress and egress from the car. 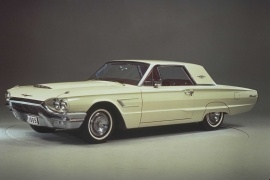