GMC released the Sierra AT4 in 2018 as a leading competitor for the reigning Ford F150, but not any 150; the Raptor version.
The half-ton pickup-trucks were often used for off-roading situations, and the carmakers made them more and more capable of getting in the middle of nowhere and back without too much fuss. But in the end, it all comes to the ground clearance, tires, power, and traction. When any of these is gone, the others can’t do anything. GMC tried to solve as many problems as possible, giving more power, more traction, and better ground clearance to the Sierra in the AT4 form.

The first noticeable difference between an AT4 and a regular Sierra was the height. With a 2” lift kit fitted as standard, the AT4 was taller and thus appeared more impressive on the road. At the front, the big headlights and the black grille dominated the roads ahead. Unlike its siblings, it featured two red tow-hooks at the front. On its sides, the plastic moldings inside the wheel-wells made the gap seems smaller, but it was tall enough to put a six-pack on the wheel without any trouble.

The interior was fit for an overnight stay if stranded in the woods. It was wide, spacious, and could fit up to five people, but only two could sleep well on the wide front seats, separated by a center console, wide enough to serve as a nightstand. GMC installed a color head-up display for the driver and a rear camera mirror.

GMC offered the Sierra AT4 with a standard 5.3-liter V8 engine, while a 6.2-liter V8 and a 3.0-liter turbo-diesel were offered as an option. For better traction, the carmaker installed a standard rear differential lock and a two-speed transfer case. 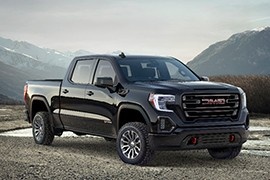