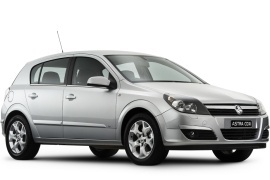 In late 2004, Opel launched the fifth generation of the Opel Astra, also known as the Astra H.
In the following year, Holden launched its version of the vehicle for the Australian market. It was a good design evolution over the previous generation, but from the technical point of view it didn’t go very well. Compared with Volkswagen or Japanese vehicles, its suspension was not exactly high tech.

A McPherson in the front and trailing arms at the rear were not exactly what the market needed in Australia. Two versions of the Astra’s diesel were offered: a 1.9-liter version with 100 kilowatts (136 hp) teamed with a six-speed manual transmission known as the Z19DTH, and a six-speed automatic model with the Z19DT, producing 78 kilowatts (105 hp). A special, only for Australia engine, was the 2.2-liter direct-injected gasoline unit Z22YH, which offered 153 hp and 220 Nm (160 lb ft) of torque.

Inside the cabin, the 5-door Astra had enough room for four passengers, or five cramped. The trunk wasn’t that big, but it was just enough. The car didn’t sell well in Australia and the station wagon was introduced to boost sales. While the base model had very few options, the top versions and trims were well equipped with light-alloy wheels and adaptive suspension settings.