It was the first Holden Commodore that parted away with the European Opel/Vauxhall Omega, and it showed the muscles of the Australian engineering.
While its predecessors were developed on various Opel/Vauxhall models, the fourth generation of the Australian sports-sedan was designed by the Holden engineers in Australia. They didn’t want to adopt anything from Europe to their harsh environment.

It might be called a car designed by enthusiasts for enthusiasts and families. The latter was added to the engineering requirements just to make a profit out of the Commodore model. Its look was aggressive, with rounded panels that looked like they were about to explode under the inside pressure, and few hundred horses will be unleashed over the road. It was produced in Australia for the U.S. market, where it was sold as the Pontiac G8 while the U.K. received the Vauxhall VXR8 version.

The interior resembled some of the Opel design cues, such as the center stack with the three turning knobs for the HVAC system. The steering wheel and the instrument cluster were also inspired by the Opel/Vauxhall Vectra, which was still in production. Thanks to its big wheelbase, it offered good legroom for the rear seat passengers. For those who needed more, there was also an extended wheelbase version named Statesman/Caprice.

Under the hood, the Commodore was offered with two engines, with different power outputs. The base model, which was mainly built for the masses, was fitted with a 3.6-liter V6 unit. The top version was the SS with a 6.0-liter V8 engine paired to a 6-speed manual. 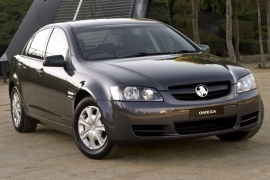