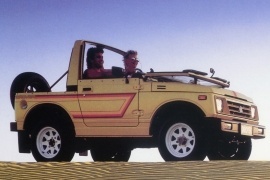 When Suzuki found the hard way that the vehicles built in Japan had to pay big taxes, it found a way to avoid them and to sell its products overseas, and the Holden Drover was just one of them.
For many years, Japanese cars had to pay high taxes if they were imported in other countries such as the U.S. or Australia. Some companies managed to open their own factories and avoided the custom invoices, but Suzuki was too small to afford such a treat. So, it formed an alliance with the G.M.’s Australian arm and produced the cars there, in complete knock-down kits at Holden factories. The car was branded as Holden Drover, but it was a badge-engineering product.

There were just a few differences between a Suzuki SJ51 and a Holden Drover. The front fascia featured rectangular headlights instead of the round ones found on the original model. The rest of the squared-looking bodywork remained the same. The body-on-frame construction allowed the manufacturer to use both versions: a soft-top convertible or a hard-top, 2-door vehicle.

Inside, apart from the Holden badge on the steering wheel, everything else was carried over from the light Suzuki Samurai. Moreover, it was easier to build the car in Australia than in Portugal (as it was the Santana Samurai) since it was right-hand drive, and the dashboard was identical to the one from the Japanese market.

The Drover was fitted with a choice of two engines: a 1.3-liter and a 1.5-liter unit. Both versions were mated to a 5-speed manual gearbox and a low-range gear for real off-road. The 4x4 on-demand system was engaged via a dedicated lever next to the gear-stick.