HONDA Accord Euro Accord 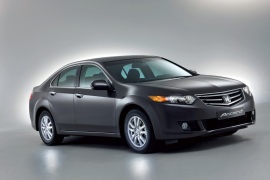 Right before the world economic crisis broke in, Honda unveiled its ninth generation of the mid-size sedan Accord for Europe at the 2008 Geneva Motor Show.
The Accord was already known in Europe for its reliability and sportiness sedan capability. Even though it was offered with only three engine choices and an outdated automatic gearbox, its sales were decent. The previous generation, the Accord 8, was highly criticized for its stiff suspension that affected the comfort. The ninth-generation fixed that along with some other issues.

From the outside, the 2008 Accord was bigger than its predecessor. There were more rounded edges and flared fenders and rear quarter panels. It kept the aggressive styling but not that aggressive as the eighth generation. The ninth generation of the Accord fitted innovative safety systems such as the CMBS (Collision Mitigation Braking System) and LKAS (Lane Keep Assist System), which made the car steer and brake autonomously. Later on, the CMBS system became mandatory for commercial vehicles and extensively used on regular ones. It used a camera and a laser beam to measure the distance to the front obstacle and the speed difference. It warned the driver and braked the car.

Inside, there was a new interior, with a new infotainment unit. It wasn’t touch-sensitive, but it was controlled via a rotary knob on the center console. There was enough room for five adults.

For the engine compartment, Honda offered two naturally aspirated gasoline units and a turbodiesel. The standard gearbox for all the range was a 6-speed manual, while a 5-speed automatic with paddle shifters was available as an option. 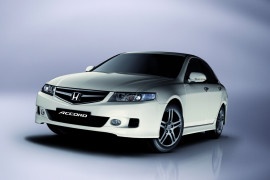 Honda introduced the seventh generation of the European Honda Accord in 2002 and prepared a facelift for it four years later.
Despite its small engine range, the Accord’s seventh-generation was very successful on the European market. Its new design language and the car’s features made it a desirable vehicle by many, especially in the sedan version. For 2006, the carmaker made a mild update even though the eighth generation was almost ready to enter production.

From the outside, the 2006 model featured a new front fascia. For specific markets, Honda sold a Euro R version that featured a black plastic grille instead of the one with a horizontal chromed slat across it. The bumper was redesigned with outer side air-intakes, and the fog-lights moved toward the center. Depending on the trim level, it featured chromed or body-colored door handles.

Inside, the carmaker made some changes on the center stack and inside the instrument cluster. It replaced the red lettering with white and blue ones to calm down the heavy-footed drivers. Like its predecessor, it offered the car in three trim levels: elegance, comfort, and executive. The only three options available were the sunroof, navigation system, and, depending on the engine, the automatic gearbox.

For the facelifted version, Honda introduced a six-speed manual gearbox for the 2.0-liter gasoline and for the 2.2-liter turbo-diesel engines. That brought better fuel efficiency on the highway. 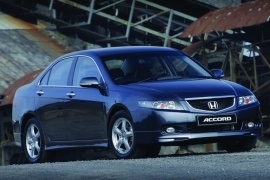 Honda introduced the seventh generation of the Accord lineup on the European market in 2003 and stirred the market with its fresh, angular design.
In just 14 years, the Japanese carmaker launched four generations for its mid-size sedan Accord. It was an incredible achievement for Honda, who managed to catch-up with the most important European brands. Worth mentioning that, starting with the fifth generation, the carmaker built different vehicles for the European and for the U.S. market.

The seventh-generation Accord featured angular, narrow, angled-up headlights and a shield-like, pinned-down pentagonal grille. On its sides, the ascending beltline offered a dynamic image for the Japanese sedan. In the back, an aftermarket-like set of taillights with a straight-cut design completed the Accord’s image.

Inside, the carmaker installed bucket seats at the front and a bench for three in the back. Its center tunnel was tall enough to threaten a third-person comfort on long journeys. Honda offered the Accord in three trim levels: Elegance, Comfort, and Executive. The latter featured a leather-clad interior and an upgraded sound system.

Under the hood, Honda installed a choice of three engines between 2.0-liter and 2.4-liter. The biggest surprise was the 2.2-liter turbo-diesel unit, which won the “Engine of the Year” award for its class. All versions were paired to a five-speed manual, while only the gasoline ones were available with a four-speed automatic gearbox. Its independent suspension in all corners and the punchy 2.4-liter gasoline unit were a perfect mix for the sporty sedan. Accord’s only downside was the small engine range. 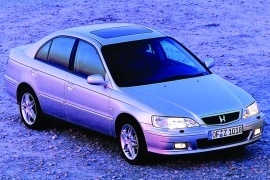 After the fifth European Accord generation, Honda shrunk its mid-size sedan and offered it a more dynamic look than its predecessor.
With a fifth generation that stood on the market less than other carmakers’ facelifted models, the sixth generation came as a surprise for its customers. It was shorter and nimbler than its predecessor and, moreover, it was offered with a high-performance engine version, the Type R.

The carmaker introduced the sixth Accord generation in 1997 as a 1998 model, but it improved the car just three years later, bringing new engines and drivetrains. Its design featured angular headlights with some bio-design influences. Its sloped windshield and flat trunk lid created a cab rearward look. For specific versions, the carmaker installed a standard wing on the back.

The interior featured a simple design, with a standard four-dials instrument cluster featuring the speedometer and tachometer in the middle flanked on the sides by the fuel and temperature gauges. Honda understood the importance of a usable center console, but it didn’t consider installing cupholders on it. Despite being a three-box sedan, the carmaker offered an option for a folding rear bench seatback.

Under the hood, Honda installed a choice of three engines with the V-TEC variable valve timing technology. It paired them with either a 5-speed manual or a 4-speed automatic.

Full Description and Technical Specifications
HONDA Accord Euro Accord 5 Doors 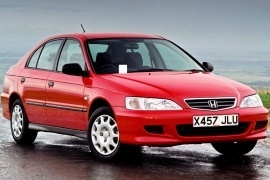 Honda was on the verge of updating and change its models, and it introduced the sixth generation of the Accord in Europe in 1998 and brought a refreshed version in 2001.
The Japanese carmaker produced the fifth generation of the Accord between 1993 and 1998 and brought a facelift after just two years on the market. Honda applied the same strategy to the sixth generation, and after just three years, it got a mid-life cycle refresh, in 2001. That made the 2001 Accord Liftback the last of its kind. Starting with the seventh generation, Honda dropped that body shape and kept only the sedan and the station wagon for the European market.

Maybe Honda didn’t know exactly how to do a facelift, and that’s why it changed the models. Some underpinnings were kept from the fourth generation and translated to the sixth offspring, but the bodywork was completely different. It was shorter than the fifth generation and featured a rakish front fascia with sharp headlights. A chromed rim surrounded the black, or wholly chromed grille, depending on the trim level.

The interior featured a similar design, with a standard four-dials instrument cluster featuring the speedometer and tachometer in the middle and the fuel and temperature gauges on the sides. Honda understood the importance of a usable center console, but unlike the U.S. models, it forgot to install proper cupholders on it. The liftback version looked more like a sedan than a hatchback, but it offered fold-down rear seats and expanded the trunk area.

Unlike its sedan version, the liftback featured only three engines, ranged between 136 hp and 154 hp. Only the sedan was granted with the 200 hp EuroR version.

Full Description and Technical Specifications
HONDA Accord Euro Accord 5 Doors 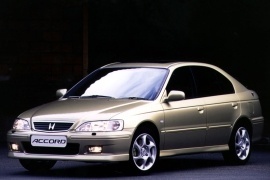 The sixth generation of the European Accord was the last one available with a five-door hatchback bodywork on the market.
Honda was on the verge of changing its models, trying to find better solutions for its customers. The Japanese carmaker introduced three generations in less than a decade, while other carmakers struggled to get a new facelift for their ten-years-old cars. But in those times, Honda didn’t care too much about profit. It just tried to offer better vehicles.

The Japanese carmaker introduced the sixth Accord generation in 1997, and, just two years later, it came with an updated version where it fixed a few R&D mistakes and introduced new features. The car was available with four- or five-doors bodyworks. In the latter version, the carmaker installed a thicker C-pillar and a sloped rear window. On top of that, it installed a rear-window wiper, which was unusual for its segment.

The interior featured a similar design, with a standard four-dials instrument cluster featuring the speedometer and tachometer in the middle flanked on the sides by the fuel and temperature gauges. Honda understood the importance of a usable center console, but it didn’t consider installing cupholders on it. The main advantage of the lift-back version was the rear split-folding seats that expanded the trunk area.

Under the hood, Honda installed a choice of three engines with the V-TEC variable valve timing technology. It paired them with either a 5-speed manual or a 4-speed automatic.