Honda introduced a facelift for the 2008 model-year Civic, which included a few enhancements to its compact sedan.
The Civic was one of the best-selling Honda vehicles, and its popularity grew thanks to its reliable engines, low maintenance costs, and comfortable ride. But all these came with a higher price than many of its competitors.

To attract even more customers to its showrooms, the Japanese carmaker tried a different approach with a more refined design for the 2008 model. At the front, the Civic featured a new bumper, with a wider, three-way split grille and side air-intakes. They were mostly aesthetic since the car didn’t really need an improvement for the cooling area. On the sides, the door mirrors received turn signals for all trim levels, while the wheels got a new look. At the back, a chromed bar linked the two L-shaped taillights.

Inside, the most important changes were on the steering wheel and on the center stack. The former received a three-spoke design inspired by the European version, while the latter got an infotainment system with sat-nav. On the top trim level, the EX, the carmaker installed a seven-speaker sound system, while the lower versions got only four.

Under the hood, Honda installed its 1.8-liter, 140 hp engine on the base level paired with a five-speed manual or, as an option, with a five-speed automatic. A CNG version was exclusively available for fleet buyers in most states, apart from California and New York. The 1.3-liter hybrid was also an excellent choice for commuters, thanks to its high fuel efficiency. 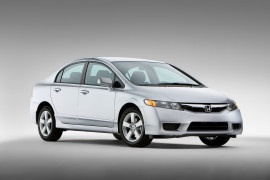