Honda’s first automobile was the S500 in 1963 and the Japanese company produced open-top vehicles ever since.
In 2015, it launched the 660 model, a car that was for the Japanese market.

The kei-car culture in Japan is big. It represents small-sized vehicles with small engines. Some of them are just for daily commute with four doors and four seats. Other, like the Honda 660, are small, light, and nimble cars that can do both: be a daily driver with economic engines and provide fun on any twisty road. And, due to its low weight, it was a fun car that gathered attention to it.

The little roadster was a mid-engine and rear-wheel-drive vehicle. Due to that concept, the car-manufacturer could move the cockpit forward and keep a very short overhang. It was something it couldn’t do in a car with the engine in the front. On the front, there was the new company design with a lowered grille in the middle and the headlights as extensions of the grille. In the back, there was the same theme design.

Inside there was room for two people. The cabin was focused on the driver, with a separating line on the passenger side. The instrument cluster was a carryover from the Honda CR-Z hybrid, with a central tachometer and a digital speedometer inside. The infotainment unit was placed high, on top of the dashboard.

For the engine compartment, Honda installed a 3-cylinder turbocharged engine. It was mated as standard with a 6-speed manual. A CVT was offered as an option and, for that, there were paddle shifters behind the steering wheel with 7 preset gear ratios. 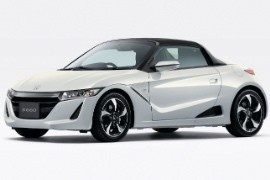