Facing stiff competition against other local carmakers, such as the Maruti Suzuki and Tata Motors, the Korean carmaker had to adapt and improve the i10.
It added 40 mm (1.6”) to the wheelbase and used them to increase the interior space for the rear passengers.

The car’s front fascia was identical to the Indian version of the i10. It featured a hexagonal-shaped grille in the bumper flanked on the sides by two side scoops, where the carmaker offered a pair of fog lights as an option. Its swept-back headlights sported a clear lens for the turn signals and orange bulbs. From its sides, the sculptured door panels were adorned with black plastic moldings and silver door handles. Its rear doors were longer than on the regular i10, thus providing an easier ingress and egress to the car.

Hyundai took care of the i10 Grand interior and placed a dual-tone dashboard with a black center stack. Since it was a low-budged vehicle, it didn’t install an infotainment unit but offered a CD stereo with Bluetooth connectivity. An automatic climate control system was offered as an option. It’s flat front seats featured only a few adjustments, while the rear seat passengers were spoiled with additional legroom. It was still not enough for long journeys, but it was good enough for average-sized people, thanks to the tall greenhouse.

Under the hood, Hyundai installed a choice of CNG, gasoline, and turbo-diesel engines ranged between 71 hp (the oil-burner) and 83 hp. 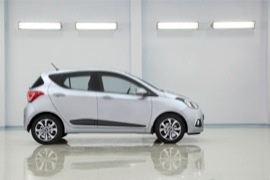