The seventh generation of the Sonata charged the market in 2014, and the carmaker promised a hybrid and a plug-in hybrid version, which were introduced later on.
In 2017, the entire Sonata lineup received an update that marked the car’s change toward a pre-premium segment. It wasn’t the budget-buy bargain anymore, but it was a technologically advanced vehicle enclosed into a refined vehicle.

Its exterior was very similar to the rest of the 2017 Sonata range. The drag coefficient was improved to a class-leading 0.24 Cd, thanks to its fluid lines and sculptured doors and side panels. At the front, the cascade-grille design and the side-scoops were meant to divert the flow and made it ran smoother on the car’s surface. In the rear, behind the sloped windscreen, the carmaker installed a profiled trunk lid that prevented turbulences behind the vehicle. Apart from the roof, Hyundai changed every other body panel.

Inside, the carmaker added a few modifications to match the exterior’s new look. Its instrument panel design and the three-spoke steering wheel were slightly enhanced, while the piano key buttons for the audio and HVAC controls gave a premium look for the center stack.

For the drivetrain, Hyundai installed a 2.0-liter, direct-injected gasoline engine. It produced 154 hp and a 38 kW electric engine helped it. When combined, the two engines provided 193 hp, which were sent to the front wheels via a six-speed automatic transmission. 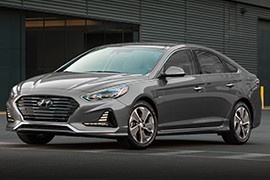