The compact SUV Jaguar I-Pace launched was launched in 2018 with the promise of a decent range and very good performance for its car segment.
Jaguar announced its electric revolution with the CX-75 concept in 2010, which was a hybrid. But its design cues and style were used for the following electric models of the British brand. In March 2019 it won the “European Car of The Year” award and, a month later, became the 2019 “World Car of The Year”. It was the first Jaguar to get these prizes.

The designer of the I-Pace was Ian Callum, who gave the car a bold appearance. Even though it wasn’t a sports car or a sedan, the wide shoulders on the rear fenders and the trapezoidal mesh-grille upfront were signatures for the Jaguar brand. The low drag coefficient of just 0.29 was unusually low for an SUV, but it was necessary to achieve an up to 480 km (298 miles) range according to the WLTP system.

Inside, a digital revolution welcomed its passengers with a complete package. A new, state-of-the-art Touch Pro Duo “Flight deck” infotainment system combined with the distinctive floating center console, made the vehicle design unique in its segment. The instrument cluster was also digital. An unusual long wheelbase for the vehicle’s length of 2990 mm (157”) allowed up to an impressive 890 mm (35”) legroom and, despite the low vehicle profile and swept roof-line, it offered 968 mm (38.1”) of headroom. The rear luggage compartment capacity of 656 liters (23.2 cu-ft) was expandable up to 1453 liters (51.3 cu-ft).

The all-wheel-drive SUV had two electric motors, with a combined power of 400 hp. It was offered with an optional pneumatic suspension. 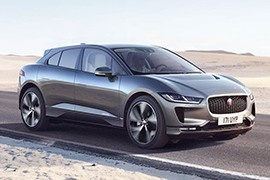