After introducing the Niro Hybrid in 2017, Kia stepped up the game and launched a plug-in hybrid version for its compact crossover in 2018.
Customers went from the horsepower war to the fuel-efficiency war in just a decade, and the Korean carmaker jumped from producing cheap vehicles to almost premium cars. While Kia didn’t impress with high-performance sports cars, it tried to save some penguins with its hybrids and plug-in hybrid models such as the Niro.

On the outside, it was the same crossover vehicle as to the regular model. It was taller than a regular station wagon but not as tall as a minivan or SUV. The pinched “tiger-nose” grille imagined by Peter Schreyer as a brand image for Kia worked well on the Niro, especially since it was mixed with the angular-looking headlights that resembled a pair of tiger eyes. On the right-front fender, a lid covered the charging port, which was the main difference compared to its hybrid-only sibling. At the back, the carmaker concealed the tailpipe for the internal combustion engine behind the bumper.

Inside, the roomy cabin shared most parts with the regular Niro. Its blue accents around the air vents and the nice fits and finishes gave the impression of a pre-premium vehicle. It wasn’t at Audi’s standards, but it was above a cee’d. There was enough room for five adults inside and a generous trunk in the back. Yet, the storage volume decreased when compared to its siblings due to the larger battery.

Under the hood, Kia relied on the same naturally aspirated 1.6-liter engine helped by an electric motor. The total output was 141 hp, and the powerplant sent its torque to the front wheels via a six-speed automatic (dual-clutch) gearbox. 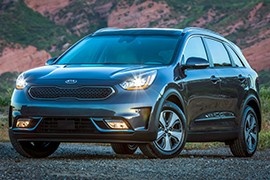