While some car-makers chose to remove the rear doors and rename their new versions as a “coupe”, Kia took a different path.
It chose the cee’d platform and installed a new bodywork on it, even if it was costlier. But the result was very good.

The pro_cee’d was the sportier version of the cee’d. It was lower and featured a different bumper design. In the front, on the GT trim-level, the fog-lights were four LEDs on each side and a wide grille in the middle. The upper grille featured a honeycomb design. The raked A-pillars and the sloped roof offered a dynamic image. On the side, the sculptured doors looked better than the plain, curved ones, found on the 5-door version. In the back, a two exhaust system was installed for the sportier versions.

Inside, there were few things carried over from the regular cee’d. It used the same dash as the normal cee’d. The center stack was the place where the interior designers decided to install the infotainment unit, with a 7” touch-screen. For the front seats, the pro_cee’d was offered with a pair of Recaro sport bucket seats. In the back, there was enough room for two adult passengers with a decent amount of legroom and headroom, despite the sloped roof.

Under the hood, the pro_cee’d was offered with a 1.6-liter turbocharged gasoline engine, which featured direct injection. It was mated to a standard 6-speed manual gearbox. The independent suspension in all four corners ensured a good cornering speed. 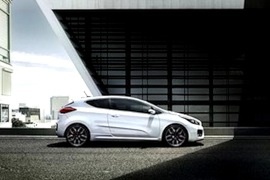