The Lamborghini Engineering SpA developed a special kit for the Diablo SE30 and named-it Jota after the original Miura built to comply with the FIA’s Appendix J racing regulations.
Back in the ’90s, Lamborghini tried to make it into Formula 1 and beat the Scuderia Ferrari at its own game but ended up in a total failure, and without wins nor cash to burn, they had to quit. About the same time, its racing engineers worked on a special kit, which was named Jota, in honor of the Miura Jota. They installed it on the SE30, which was already a lightened version of the Diablo, and it resulted in the fastest Lamborghini ever built to that date. The carmaker built only 28 kits, and 12 of them were installed in its factory.

Since the Jota version was based on the Special Edition 30 model, it kept most of that version features. There was a bumper with four fog lights at the front, while on the sides, the car featured roll-down small windows segments and the fuel-filler on the passenger side. The Jota kit came with an important upgrade over the engine cover. The engineering team introduced special air-intakes above the car’s roof. In the back, Lamborghini installed an adjustable wing.

Inside, the SE30 Jota featured two main materials: carbon-fiber and Alcantara. Since it was a lightened supercar, it didn’t feature power-windows. There were only two small areas that could have been manually rolled down via a knob on the door. For the instrument panel, Lamborghini installed white dials instead of black ones in the rest of the Diablo range.

Lamborghini Engineering modified the engine and increased the V-12’s power to 600 hp. A six-speed manual gearbox was installed. 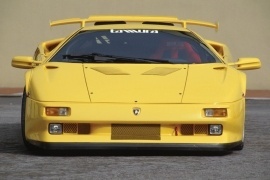