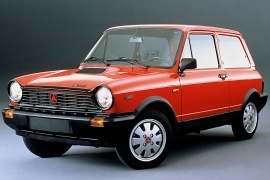 It was the last stint for the Lancia A112 Abarth before changing into the Lancia Y10 in 1986, and it was based on an old platform made by Fiat for the 128 model.
In 1969, the small Italian carmaker Autobianchi bought a Fiat 128 platform, shrunk it, and gave it a new life in the form of the A112. It was made to compete against the Monte Carlo rally-winner Mini. While it couldn’t match the British vehicle’s sales, it was a successful vehicle built in over 1.2 million units. After Fiat bought Autobianchi, its products started to be sold as Lancia.

The car’s exterior resembled much of the original Autobianchi A112 from the late ’60s, with two round headlights that sat higher than the hood. Abarth tuned the little hatchback in the early ’70s, and the first Lancia A112 Abarth rolled-out from the assembly line in 1982. The 1984 version was mostly a facelifted version that included a black plastic grille at the front, and black plastic door handles.

Inside, the carmaker designed the car for four adults. Although, the rear seats were very cramped. In front of the driver, the carmaker installed a small instrument cluster that featured two large dials for the speedometer and tachometer. The coolant-temperature and the fuel-level gauge were installed inside the speedometer’s dial. At the front, a pair of bucket seats with removable headrests were upholstered in leatherette (vinyl).

Under the hood, Abarth tuned the 1.1-liter gasoline engine to offer almost 68 hp for the street version paired to a 5-speed manual. It wasn’t a powerful engine, but thanks to the car’s low weight, it ensured spirited driving on the tiny 13” light-alloy wheels.