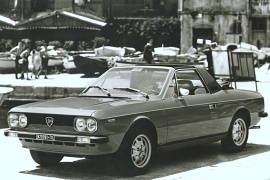 Lancia was not very convinced that a roadster would be appropriate on the market and didn’t want to invest in a new chassis, so it came with a smart idea: the targa.
With an increasing demand for open-top vehicles on the market, and especially on the U.S. market, Lancia closely worked with the Italian coachbuilder Zagato and made an open-top version for the short wheelbase Beta Coupe, even though it wasn’t a genuine roadster.

Fiat proved that customers were not very concerned about the existing B-pillar as long as it was behind the front seats. They cared more about the wind in their faces and the hair in the wind image. Zagato took the beautiful Beta coupe designed by Pininfarina Studios, cut the roof above the front seats, and made retractable side panels and a plastic, folding rear window. With all these elements removed, the Beta Coupe changed its shape into a targa/roadster vehicle, and there was no need for a new chassis underneath.

Inside, it was the same Beta Coupe with room for two at the front and a pair of seats good only as a storage area, which hardly offered some space for anything bigger than a small dog or a cat.

Under the hood, Lancia used the same drivetrains from the regular Beta Coupe, which were good enough to offer enough driving pleasure.