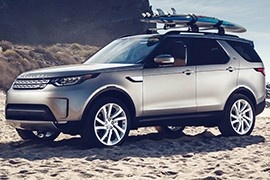 The 2017 Land Rover Discovery was a completely new model, designed from the ground up.
But, somehow, succeeded to keep the original cues of the Discovery Series I with its specific two-stage roof.

Unlike most of the cars on the market, the 2017 Discovery had a small grille and a very big bumper. In the lower part, it had a silver shield and on the sides, it had air-vents for brakes cooling. The roofline had a small ascending slope over the C-pillar to improve the headroom for the rear passengers. The dynamic look was enhanced by the standard 19” wheels. As an option, light-alloy wheels of up to 22” in size were available.

Inside, the Discovery took some amenities from its Jaguar siblings, most noticeable being the infotainment unit that featured a dual-screen view. Like the generations before it, the 2017 Discovery had an option of up to 7 seats. Due to vehicle size, the last row was suitable even for adult passengers, not only for toddlers.

The off-road capabilities were kept at the Land Rover standards, with a wading depth of up to 850 mm (33.5”). The ground clearance of up to 22 cm (8.6”) made the car very capable of untraced paths. 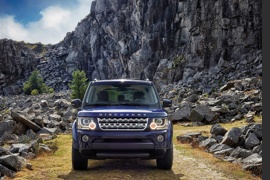 Despite using the LR4 name, the 2013 Discovery was more of a significant facelift for the third generation of the well-known Land Rover model than a completely new vehicle.
After Ford sold the Land Rover brand to Tata Industries, the Indian holding invested a big chunk of money into the R&D department. New engines, new options, and new transmissions were adopted to make the Discovery a much better car. And, somehow, it succeeded.

With a headlights design inspired by its bigger brothers, the LR4 was the last step before a new model. It still kept the same body structure with an aluminum, unibody shape. The two-heights roofline from the first generation was kept. Despite the general trend of making the off-road vehicles looks more aerodynamic, the LR4 was still shaped with an ax and trimmed with a chisel.

The interior was heavily modified, but it still kept some buttons and shapes from various Ford models. On the center console, the automatic transmission selector was a rotary knob, just like those found on the Jaguar XF. Before that, a conventional lever was used instead. The infotainment unit was placed higher on the center stack, and, if that wasn’t ordered, a big empty box was found there. The LR4 kept the same seating configuration, which allowed them to offer room for up to seven passengers.

Under the hood, the LR4 was offered with a choice of two 3.0-liter engines, mated to a standard 8-speed gearbox. 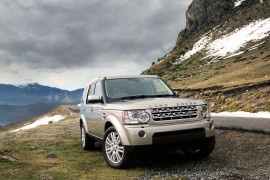 Introduced for the first time at the 2009 New York Auto Show, The Land Rover Discovery 4 lures its potential owners with a more refined and upper class feel.
The premium SUV from Land Rover comes with a completely redesigned center console, dashboard and seats. The new Discovery, named LR4 in the US market, sees a more aerodynamic facelift, LED lights front and rear, new suspension components, revised steering and improved traction control. Also the engine range will have two new additions, the 3.6 V6 diesel and the 5.0 V8 petrol versions, which manage lower fuel consumption and an increase in power and torque at lower rpm. 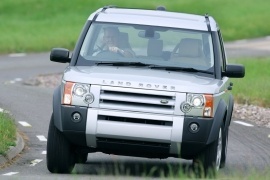 The third generation of the Discovery was launched in 2004 and the much-awaited upgrade was kind of a disappointment.
The LR3 designation was for the U.S. market, continuing the LR2 name, which was assigned to the Land Rover Freelander 2. While the first two generations had live axles, the LR3 was introduced with all-wheel independent air-suspension. That allowed the vehicle to increase or decrease its ground clearance but raised doubts about its durability. The second generation of the Land Rover Discovery was kind of a disappointment due to reliability issues.

Under Ford ownership, this new generation came with special new bodywork, a mix between a monocoque body and a body-on-frame. The result was a heavier vehicle then a unibody and not as stiff as a chassis-based vehicle.

But the biggest enhancement is the introduction of the Terrain Response system, which set all the car’s systems (gear, transfer ratio, and differentials) according to the nature of the terrain. It was able to send the most torque to the wheels that have the highest traction and it wasn’t just a marketing slogan. It really worked.

The LR3 had a V8 AJ41 engine coupled as standard with a six-speed automatic and a two-speed transfer case. A computer-controlled progressively locking central differential ensured traction was retained in tough conditions. A similar differential was available on the rear axle to aid traction. 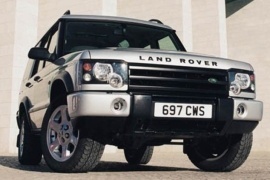 While the second generation of the Discovery was marketed as evolution more than a revolution, the 2002 model was just a minor facelift.
In 1998, Land Rover thought that electronics could replace the old-school mechanical parts that transformed a regular 4x4 into a serious off-road vehicle. Shortly after, it noticed the hard way that a computer-controlled traction system cannot replace the locking differentials.

For 2002, Land Rover introduced a series of modifications that changed the car’s look and added more comfort features inside. On the outside, the new headlights offered a multi-lamp arrangement while its predecessor featured plain, squared units. The bumper was also revised, and, depending on the trim level, it featured a pair of fog-lights.

Inside, the carmaker was keener for details and installed better seats and new upholstery options. Like its predecessor, it offered with an option for seven seats, but only for vehicles fitted with rear air suspension. In the safety department, Land Rover added side airbags and an all-leather interior. The Active Cornering Enhancement system (ACE) acted as an anti-roll-over one. It used the brake system to balance the vehicle, and, due to the electronically controlled stabilizer bars, it reduced body-roll.

On the technical side, the most significant improvement was the reintroduction of the locking center differential. The base version had it available as an option, while it was standard on the HS and HSE versions. 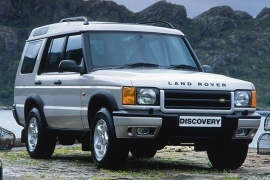 The second generation of Discovery was marketed starting with 1999.
By this time, focus fell on the Discovery not as an utilitarian vehicle, but a larger, safer city car. That meant changing the interior to make it more comfortable and suitable for everyday use. The rear body received an extension in order to maximize boot space which later turned out to affect the cars stability off-road. A new engine was introduced, the in-line direct-injected 5 cylinder diesel which put out more power and had better fuel efficiency than its predecessor. The V8 was upgraded to 4.0 and received a new exhaust system which improved performance. 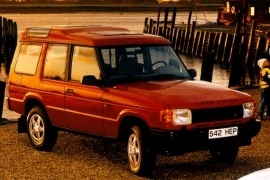 In 1994, Land Rover improved the Discovery range in both versions: the 3- and the 5-doors.
It brought several modifications to comply with the new safety and emissions regulations.

Land Rover didn’t have the habit of doing a facelift to its vehicles. Usually, they just named-it as a new series. That’s why, on some markets, the 1994 Discovery was named Discovery II, even though it was just a mid-life cycle impulse that brought external and internal modifications.

Designed as a premium SUV, the Discovery offered an excellent mix between comfort, price, and off-road abilities. It was offered in both versions, with three or five doors, to make the car more appealing for those who tried to take them into serious off-road adventures but to pay lower taxes. Some versions were registered as utility vehicles in the U.K. since they had only two doors. The 1994 model featured bigger headlights with an angled upper inbound corner and two sets of taillights in the rear, but only one was functional.

Inside, Land Rover offered a good front room for the Discovery’s occupants. The two-door Discovery 1 had short front doors that made access to its rear difficult, but once passengers were installed, they were granted enough room. Not to mention the pop-out windows for them, for a breath of fresh air.

Under the hood, Land Rover dropped the older engines and adopted a new, 2.5-liter, direct-injection and turbocharged diesel. The carmaker offered the car with a 3.9-liter V8 gasoline unit. Both versions were mated to a 5-speed manual gearbox and a low-range transfer box. 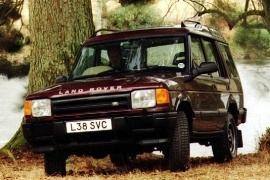 The Discovery 2, as it was sold on some markets was actually a facelift of the Mark 1, with minor modifications on the car’s appearance and an upgrade in engine size.
The diesel was moved from 2.5 to 3.0 litres and the V8 from 3.5 to 3.9 litres. The new models had larger headlamps and a whole new set of lights on the rear bumper. For the models that were sold to the Us starting with 1995, Land Rover had to fit airbags in order to meet American safety regulations. another big upgrade with this series was the introduction of the permanent four-wheel drive system which was equipped with a lockable center differential. 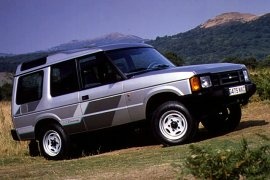 Land Rover made a stunt move and introduced a more affordable version for the Range Rover when introducing a three-door Discovery on the market in 1990.
Like the Range Rover, the Discovery started its career as a three-door only off-road vehicle. In the following year, it added another set of doors for the rear passengers. But it was the first version that conquered the hearts (and pockets) of those who liked a comfortable family vehicle but with outstanding off-roading skills.

Even though the aluminum was already more expensive than the regular steel panels, Land Rover still used it. At the front, the carmaker installed rectangular headlights and corner-mounted turn signals to comply with the latest road legislation from Europe and U.S. On the sides, the doors featured flush-mounted door handles, and behind them, Land Rover added a large side window between the B-pillar and the thick C-pillar. A third glass area provided more natural light in between the C- and the D-pillars. Finally, the British designers created a two-step roof with a raised area above the trunk.

Inside, there was a modern interior with front bucket seats that tilt-forward to make room for the rear passengers. For the driver, the carmaker installed buttons on the sides of the instrument cluster. For a comfortable ride, there was an option for two sunroofs on top of the three-door Discovery. To get in the rear seats, the front ones tilted and slid forward.

But the essential part of the car was under the bodywork. Its coil-springs in all corners with live axles ensured a long suspension travel and comfortable ride. Land Rover installed an all-wheel-drive system with a locking center differential and a two-speed transfer case. Under the hood, the carmaker offered a choice of two engines: a 3.5-liter gasoline V-8 and a 2.5-liter turbo-diesel. The former was developed especially for the U.S. market, while the latter was the top-seller on the European continent. For specific countries, such as Greece, Italy, and Portugal, Land Rover provided the vehicle with a 2.0-liter gasoline engine. 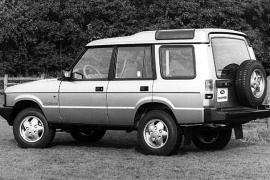