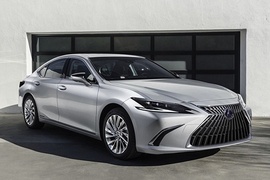 Lexus refreshed the seventh generation of the ES range and unveiled it at the 2021 Auto Shanghai, showing fewer exterior changes but more upgrades for the interior and driving dynamics.
Ever since its first generation, Lexus tried to catch more customers from Acura’s buyers. To convince them, it tried to offer better technologies and more luxurious features. But the carmaker was also obsessed with quality control, and it topped the ranks for the most reliable brand in the world several times. But some of the ES features were outdated, and Lexus tried to fix that with the 2021 model year.

On the outside, there were not too many changes. The front fascia still retained a similar spindle design for the grille but with horizontal slats in the background instead of a mesh design. On the sides of its apron, the designers installed smaller side scoops than on its predecessor. Its angular headlights swept-back featured horizontal V-shaped LEDs for the daytime running lights.

Inside, the Lexus finally introduced a touch-screen for the infotainment system, but it didn’t give up to the touch-pad from the center console. To make the new, standard 8” displays easier to reach, it moved it forward 4.3 inches (11 cm). A 12.3” unit was on the options list. The carmaker also added rear-view cameras instead of mirrors, with the screens mounted a the bottom of the A-pillars. 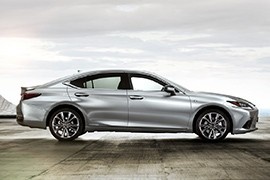 Lexus has always made luxurious cars and the ES was no exception.
It offered comfort, style, elegance and softness for the pickiest drivers.

And when I say picky, I am only referring to those who were looking for comfort, because the ES offered little to no sportiness and not much feedback to feel in touch with the car.

The ES reached its 6th generation in 2018, a model that was based on the Camry.

The ES had an electric trunk that could only be opened using the key, however, the good part about it was that the load area held enough items. Plus, it was equipped with bags for shopping.

Even if the ES was not considered a fast car, it was equipped with a 3.5-liter V6 engine, developing 268 hp, mated with a 6-speed automatic transmission. The engine was incredibly quiet and vibration free and the transmission did its job so well you could not feel the gear shifting.

The interior of the ES is what we call luxurious. While it did not have many gadgets, unlike the german cars, the clean look of the ES offered features any driver would appreciate.

The steering wheel had a nice wood and leather combination, as well as the door panels that were wrapped up in leather, with the exception of the trims which were piano black. The dash was covered in nice looking simulated leather.

The front seats were both ventilated and heated, as well as the steering wheel.
What was unusual was the way the driver could control the infotainment system. The ES had something similar to a computer mouse, with an “enter” button on the left side. Luckily, most of the controls were duplicated in the buttons. 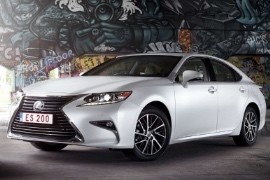 For 2016, the Lexus ES received an overhaul, coming with up to date looks and features to keep it competitive on the market.
The exterior gets sharper and more aggressive through a revised front fascia, chrome-trimmed spindle grille, LED headlights, L-themed stoplights, semi-integrated exhaust, new wheel designs, and exterior colors. The interior gains a new materials and trimmings along with a more technology. You can now count on Pre-collision System, Lane Departure Alert with Steering Assist, Intelligent High Beam, High-Speed Dynamic Radar Cruise Control, Lexus Enform Remote and more. 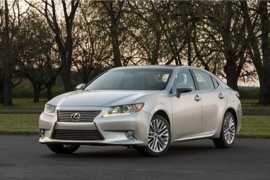 Codenamed the XV50, the sixth generation Lexus ES mid-size 4-door sedan was revealed on April 4th, 2012, at the New York Auto Show, going on sale the same year.
Produced in two engine flavors at Toyota’s factory in Miyawaka, Japan, the ES is larger than ever and offers improved legroom. Available from launch, the new ES 300h is the first hybrid version of the car, combining the traditional 2.5-liter four-cylinder engine with an electric motor to deliver a combined 200 hp. A bigger 3.5-liter V6 is available worldwide, while a basic 2.5-liter 250 model was launched specifically for the Chinese market. 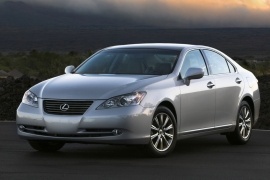 Based on the same platform with the best-seller Toyota Camry, the 2007 Lexus ES was launched in February 2006 at the Chicago Auto Show.
The ES was considered for a long time their entry-level model. It wasn’t as sophisticated a hybrid or a high-performance vehicle. It was just another Camry with better materials and nicer design. The ES was one of the quickest cars to 60 mph (97 kph) with a front-wheel-drive and it was timed with 6.2 seconds.

The exterior look showed the new headlights design for the brand’s image. The small grille was flush to the hood, on the same arch. It was different than other Lexus vehicles on the market that showed a more vertical grille. The sloped rear end helped the car achieve a better drag-coefficient.

Inside, the Lexus ES 350 interior featured walnut wood accents, leather seats, dual-zone climate control with air filter, an MP3 player auxiliary input, power tilt, and telescoping steering wheel, and eight standard airbags. A keyless entry and ignition system, Lexus SmartAccess, which does not require the electronic remote to be taken out of the driver’s pocket, was standard.

Under the hood, there was a new, 3.5-liter V6 engine. It was the same unit that was later on found on some other Toyota models all-over the world. It was mated to a 6-speed automatic transmission and helped to gain traction with an intelligent traction control unit. 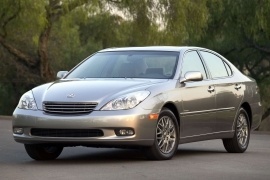 Lexus started the production for the ES fourth-generation n 2001 in Japan and built it exclusively there on the Toyota K platform shared with the Camry and the Avalon.
By 2001, Lexus was already known for its high-quality, very dependable vehicles. The ES range appeared on the market in 1988 as a rebadged Toyota Camry Vista and rushed through generations building three of them in just 13 years. The fourth generation of the ES received features from the company’s flagship, the LS, and rfined technologies such as the drive-by-wire electronic throttle.e

Thanks to its fluid lines and raked front fascia and windshield, the 2002 ES obtained a Cx 0.28, increasing the car’s fuel efficiency. Its swept-back headlights and slanted grille created a dynamic image for the luxurious four-door sedan. On its sides, the chromed door handles and trim around the window line amplified the premium image.

Inside, Lexus installed a carefully crafted interior with California walnut trim on the steering wheel, dashboard, center stack, and doors. It was finished to one of the greatest attention in its segment and adorned with chromed accents. As an option, the carmaker added a Mark Levinson premium auto, dual-zone climate control, and heated seats. There was plenty of room for all passengers, and the bench could comfortably host three people in the back.

Under the hood, Toyota installed a 3.0-liter engine paired with a five-speed automatic gearbox. It used the same drivetrain from the Camry, hence the front-wheel-drive system. Starting with 2006, the car received a 3.3-liter version as well.